Sketch review: The Vikram starrer is a run-of-the-mill action entertainer!

Sketch has quite a few twists and turns but nothing new to offer. One can safely call it a run-of-the-mill crime story with a few emotionally demanding moments.

Vikram is probably one of the most dedicated actors who pushes himself to excruciating limits to play to perfection his characters in films. For a man who has done demanding roles in films like Sethu (1999), Anniyan (2005) and I (2015), playing Sketch must have been a cakewalk. For, Sketch is a film with a simple story.

The film, set in North Madras, has quite a few twists and turns but, to be honest, nothing new to offer. One can safely call it a run-of-the-mill crime story with a few emotionally demanding moments.

Durai (Arul Dass) is the right-hand man of Jain (Hareesh Peradi), a moneylender who seizes vehicles to get people to repay their debts. Jain has his business in the North Madras region, an area that is under the control of a gangster called Kumar.

After Durai loses a hand in an attack, he recommends his nephew Sketch (Vikram) to his position, much to the dismay of another gangster (RK Suresh) who was hoping to take his place as Jain’s confidant.

Sketch has a close set of three friends who work with him. He takes pride in the fact that he can lift vehicles at will and get people to pay up. 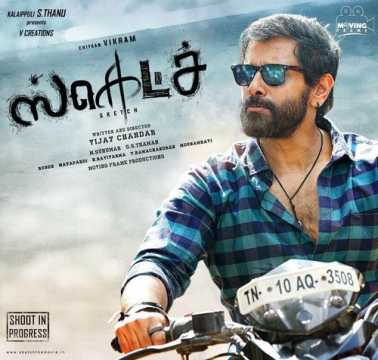 As Sketch gloats about his ability to seize vehicles, Jain assigns him a challenging task. He says he will reward Sketch with a 10-sovereign gold chain if he can seize a vehicle of gangster Kumar, which is special to him.

Sketch does as told. But Kumar doesn’t take to it kindly. He decides that everybody involved in lifting his vehicle must die.

The film has some exceptional songs. Thaman S has scored mellifluous music and it is a pity that the songs haven’t got the kind of attention they deserved. Each song in the film deserves special mention.

Vikram, as expected, has no qualms turning into the character of Sketch. The man, despite ageing, still looks handsome and fit. He single-handedly carries the film on his shoulders.

Tamannaah Bhatia as Ammu is gorgeous. The actress is naturally so beautiful that she does not require make-up at all. Moreover, she seems to have mastered the art of emoting well and, by and large, her performance is flawless. The only place where there is a problem is in the songs where Bhatia is seen perfoming classical dances. In these portions, the make-up is excessive and her dancing, out of sorts.

Some parts of the romantic portions between Bhatia and Vikram are cute. Other artistes who have done a good job include Arul Dass, Sriman Reddy and Soori, who has a limited role in this film.

Sketch has a strong message but then it comes only in the last five minutes of the film, making one wonder if the message was added as an afterthought.

Vikram’s mannerisms in the film remind you of his performances in earlier films. For instance, the manner in which he holds up his hand to indicate he has marked out someone to sketch reminds one of Vikram’s performance in Gemini (2002), in which he would often say, ‘O Podu’ using both hands.

Then, in one action sequence, Vikram is seen running briefly, swinging on a pole and settling down comfortably on some stairs before giving a sound thrashing to the baddies. This reminds one of an action sequence in Saamy (2003) in which he runs from those who have been sent to kill him at the temple and then bashes them up.

The director Vijay Chandar seems to have tried to use everything that worked for Vikram in the past. On the whole, Sketch is certainly not Vikram's best film, but it isn't bad either.