Hitesh Kewalya's directorial debut aims to change the gaze of love stories in Hindi cinema, with frequent throwbacks to a 1990s classic with Dilwale Dulhania Le Jayenge (1995), and succeeds to a large extent.

Aman (Jitendra Kumar) and Kartik (Ayushmann Khurrana) are a happy couple in love in Delhi, when they need to lie low for a few days after helping a friend (Bhumi Pednekar, in a special appearance) elope. Kartik suggests they head to Allahabad, Aman's hometown, to celebrate the wedding of his cousin Goggle (Maanvi Gagroo). Aman is hesitant because he is not ready to face his smothering family.

But Kartik persuades him and they are aboard the cleverly named 0377 wedding train from Allahabad to join the Tripathi family in its celebrations. The patriarch, Shankar Tripathi (Gajraj Rao), catches his son in an amorous moment with Kartik and his whole world turns upside down. The agriculturist, who has recently cultivated a worm-free black cauliflower, sets about eliminating Kartik's influence on Aman and trying to erase the fact that he is gay. 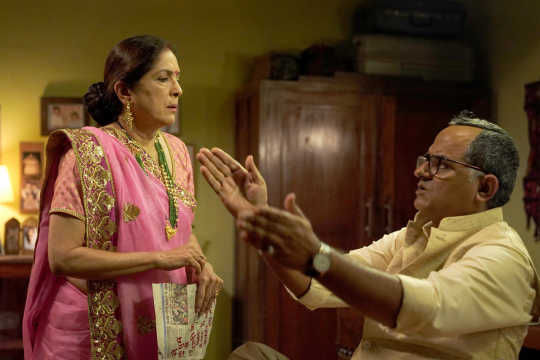 He comes across a formidable opponent in the charming Kartik, who wants the world to know of Shankar's homophobia and to help him understand his relationship with Aman. This romantic comedy, set against a familiar backdrop of Indian weddings, slowly goes about changing the way we look at love stories. There are film references aplenty here, from Amitabh Bachchan's Deewaar (1975) to Sholay (1975), but the comparisons to Aditya Chopra's Dilwale Dulhania Le Jayenge (1995) are the most obvious.

Shankar is referred to as Amrish Puri, while, like Shah Rukh Khan's Raj, Kartik seeks to change the opinions of his beloved's family, one by one. And the film's finale harks upon many familiar scenes when the couple's love story is finally fulfilled. The only difference is that writer-director Hitesh Kewalya's Shubh Mangal Zyada Saavdhan presents a same-sex love story in the most normal way possible, which is completely refreshing for mainstream Indian cinema.

After Aman declares his passion for Kartik in front of his shocked family members, Shankar launches a steady campaign to correct what he thinks is wrong. He ropes in his wife Sunaina (Neena Gupta) and brother Chaman (Manurishi Chadha) to get Aman wedded to their neighbour, the flighty Kusum (Pankuri Awasthy). Thus begins the battle of Aman and Kartik to get the Tripathi family to see, understand and, finally, accept their love.

Kewalya, who wrote the screenplay and dialogue for Shubh Mangal Saavdhan (2017), sets up many hilarious instances and exchanges between the colourful characters, who each have an interesting backstory. I would love to see a separate film about Aman's uncle Chaman, his wife Champa (Sunita Rajwar) and their quest to get their daughter Google aka Rajini married. Over the course of the film, they have some enlightening moments themselves. 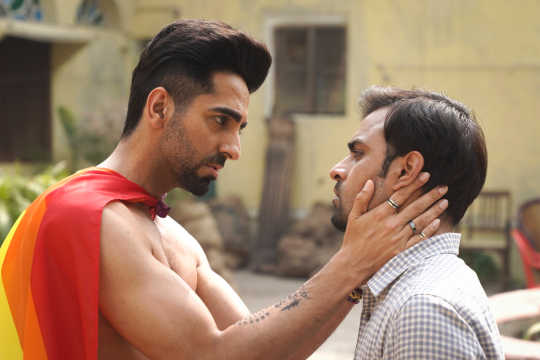 But the focus here is Aman and Kartik, opposites who are attracted to one another. Kartik is out and proud while Aman hasn't come out to his family and has to do so when he is cornered. Later, he is emotionally blackmailed into marrying Kusum, just to keep up appearances, else 'what will people say'.

Actors Ayushmann Khurrana and Jitendra Kumar, credited here as Jeetu, have a wonderful chemistry as a couple in love; there is no awkwardness. The film includes scenes of their togetherness, from sitting on a bike to even holding hands, just like any heterosexual couple.

However, the film does have an added responsibility of sending out this social message of normalization to the entire country. So included are scenes where it is emphasized that being gay is not a disease. At one point, Aman tells another character, "I'm gay and it's not my problem," while Kartik tells the Tripathi family, "My sexuality is my sexuality. None of your sexuality." Moments like these are revolutionary.

Shubh Mangal Zyada Saavdhan also addresses the landmark section 377 verdict by the Supreme Court. The film is set in a time before the ruling that decriminalized same-sex relationships among consenting adults.

In the second half, the comedy dips a little as the characters' constant clashes with one another gets confusing. There are too many tangents thrown to the audience at once. When it re-focuses on Aman and Kartik, that is when the film hits its target. 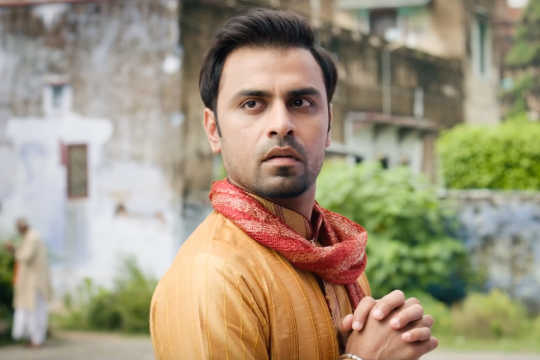 Jeetu is absolutely sincere as the long-suffering Aman Tripathi who has too many expectations riding on him, while Khurrana nails yet another heartfelt performance. The actor is known to specialize in 'message' movies, and like his previous film, Dream Girl (2019), shows how comfortable he is in his masculinity as he flips the role of a 'hero' in a Hindi film.

Meanwhile, the Badhaai Ho (2018) scene-stealers, Gajraj Rao and Neena Gupta, once again turn in strong performances as Aman's regressive parents, though their impact here is dimmed. Chadha stands his ground as Shankar's oft-bullied brother who gets his moment to shine at the end. Gagroo's character, in particular, deserved a better arc.

It is time that Hindi cinema is ready for a mainstream love story between two men. Love is love, after all, and that's the ultimate message of Shubh Mangal Zyada Saavdhaan.