In the end, it seems writer Dipanwita Ghosh Mukherjee and director Indranil Ghosh fail to take an ideological stand.

Indranil Ghosh’s film Shironaam begins with a lot of promise as it establishes conflict in a familiar urban space with its roots in various spheres of society from the very beginning. The camerawork by the veteran Shirsha Roy and Sanjib Datta’s clever editing perfectly place the strong star cast in their individual spaces, while the song in the opening credits generates anticipation for content with strong social commentary.

The film opens on a get-together where a group of close friends are discussing the news of Osama Bin Laden’s death. While Abhin (Jisshu Sengupta) voices his alternative views on the matter, his friend (Sujan Mukhopadhyay) pulls his leg for having such strong political opinions from a privileged position. However, the atmosphere is prevented from turning tense, as all of them break into song, chanting Hok Kolorob, a popular tune by Shayan Chowdhury Arnob on the power of resistance.

The plot then moves forward with the unemployed Abhin suddenly receiving a job offer from Kolkata TV, a news channel. Chief editor Rajat (Anjan Dutt) appears to be very protective about his channel’s interests and adept at the manipulative strategies often adopted by journalists. 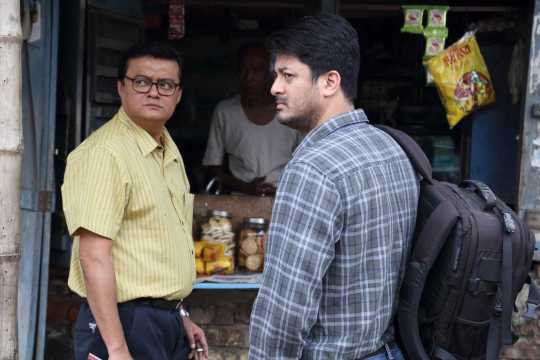 The film hints at two dominant themes from this particular point. Abhin and his senior colleague Sujit (Saswata Chatterjee) travel to an obscure place to speak to a dreaded ‘terrorist’, who has been concealing his identity. As they enter the village, the common people’s daily struggles in the midst of a constant war between the police and the extremists haunt their thoughts.

The conversation between Sujit and Abhin on the current scenario of the village as well as their plans to conduct the interview and the obstacles they face in the process point to a strong political storyline that has not been seen recently in Bengali cinema.

However, we know from the title of the film as well as from the trailer, that it deals with the sensationalist news headlines that are concocted for the sake of generating TRPs. While Rajat initially seems perplexed as the scheduled meeting of the secret assignment gets stalled, he makes the most of it when Abhin goes missing. It is apparent from the trailer that he then puts out unverified reports on the "abduction" of the journalist, without lifting a finger to see what really happened to him.

Abhin’s partner Anandi (Swastika Mukherjee), sceptical regarding the assignment from the very beginning, is kept in dark by Rajat, who also restricts Sujit’s actions as he genuinely gets concerned for Abhin’s well-being.

The audience will draw parallels between the portrayal of Anandi’s harassment at the hands of reporters who stoop to heckling her and the insensitivity that now has become so characteristic of certain journalists in India. While one comes to expect the theme of Abhin’s family and friends being pushed by the media to be explored to the fullest extent, the plot pursues a narrative that hardly does justice to the build-up, leaving the audience with unfulfilled anticipation.

In the end, it seems both writer Dipanwita Ghosh Mukherjee and the director fail to take an ideological stand, lending the film a rather unexpected yet cliched ending. An unnecessary long sequence between Abhin and prostitute Reshmi (Ankitaa Chakraborty) in an obscure red-light area not only hampers the progression of the plot but also ruins the mood of the film with the actress’ loud performance. 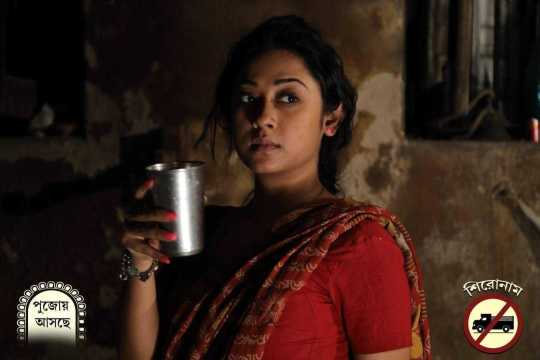 More can be said about the illogical mounting of the climax; however, that will give away spoilers. But the decline becomes evident as sensible dialogue get replaced by cheesy lines.

Apart from the histrionics in the red-light area, the entire star cast, including Dutt, Chatterjee, Sengupta and Mukherjee, put on great performances and perfectly etch each of their characters' graphs.

Raja Narayan Deb’s music complements the film well especially in a romantic scene where Anandi dreams of visiting a heritage building with Abhin, as he takes photos of her in one of the film's cinematically rich moments.

Shironaam had immense potential but devolves into an exhausting watch. And the drastic tonal shift in the second half would lead one to believe that film was made by two people.

Shironaam was released in theatres across West Bengal on 21 October.

Check out the trailer below and let us know if you are keen on watching the film.