Sidharth Malhotra stars as the late army officer who led two dangerous missions in the Kargil war in this lukewarm biopic directed by Vishnu Varadhan.

In the recent past, Hindi cinema has seen five or six, maybe more, biopics every year. They pretty much stick to a template, from examining the origin to the subject’s drive and eventual triumph. Some of these have happy endings, others don’t.

Shershaah (2021), co-produced by Dharma Productions and Kaash Entertainment Film, is the story of Captain Vikram Batra, the Param Vir Chakra awardee who led two successful missions that were instrumental in winning the Kargil war of 1999. It is no coincidence that the film arrives days before Independence Day.

Sidharth Malhotra plays Batra and his twin Vishal. Vikram knows from childhood that he wants to be a soldier. Even his romance with college classmate Dimple Cheema (Kiara Advani) can’t deter him from his path. In 1998, he is posted in Kashmir with the 13 J&K Rifles where he becomes a valuable part of the team. It is a quick ascent as Batra emerges as a leader to take charge in the mission to reclaim a key position in the war.

Director Vishnu Varadhan and screenwriter Sandeep Shrivastava focus on this key period from his initial posting to the Kargil war, intertwining it with his affair with Dimple, who becomes his fiancée. In the second half, the missions to recapture the bunkers and key points along the Tololing mountain take precedence and the feature sets up sequences of climactic clashes between Indian and Pakistani forces that lead Batra to his tragic fate. 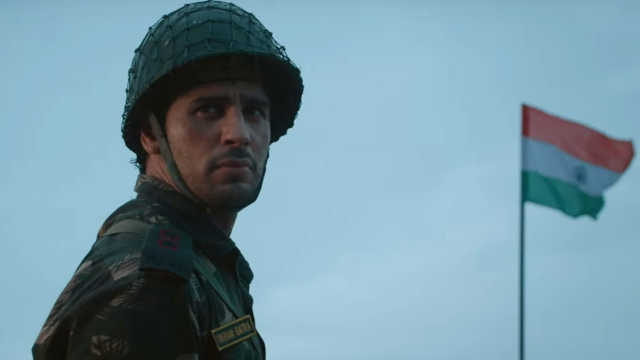 It is here that the film takes shape as the action by Stefan Richter and Sunil Rodrigues brings the dangerous mission alive. The Hollywood-style background score by John Stewart Eduri swells at the right moments, from the unfurling of the Indian flag to Batra’s leave-no-man-behind attitude, captured perfectly by director of photography Kamaljeet Negi.

While the biopic is a decent tribute to the fallen hero, it sticks to two sides of Batra, the patriot soldier and devoted but absent fiancé. Curiously, it does not delve into the bonds between the twins, even though it is Vishal who narrates the film. Vikram’s interactions with the rest of his family are also limited.

Dharma's previous feature Gunjan Saxena: The Kargil Girl (2020) was a more balanced look at the war and established the bonds between family and duty well. In Shershaah, titled after Batra’s codename, by the end of the feature, there is still a sense of something missing from the narrative.

Malhotra lets us in on Batra’s charm, daring and courage, but that’s all we are allowed to see. There is a hint of his inner despair when one of the men from his battalion is killed in action, but the film doesn’t spend too much time on it.

The actor is best in the action sequences and not quite effective in the key emotional scenes. Advani’s character, which gets enough screen time, does not rise above that of a love interest.

Shershaah veers into those filmi moments in Vikram and Dimple’s interactions, and one over-the-top encounter between Batra and a terrorist where he utters what feels like a movie dialogue. As the end credits reveal, Vishnu Varadhan and his casting director Jogi Mallang have done a fabulous job in choosing actors who physically matched the personalities they were to portray. The ensemble cast, including Sahil Vaid, Shiv Pandit, Raj Arjun, Shataf Figar and Anil Charanjeett, is memorable.

Thankfully, there are no moments when the soldiers burst into song. For those who don’t know Capt Batra’s story, Shershaah will enlighten them. However, the biopic goes through key moments like a checklist instead of highlighting the poignancy in the short but heroic life of Vikram Batra.