Aniket Chattopadhyay's political drama is essentially a political film that shows how power mongers change the dynamics of a society, sacrifing values and humanity in the bargain.

Aniket Chattopadhyay's political drama Shankar Mudi deals with an era in which globalization was still new. The social and political messages conveyed through the film suggest it was made a while ago but has only got released now.

The film has stark depictions of class struggles and is clearly leftist in inclination. However, the political atmosphere is not depicted with a great deal of complexity. It is a rather archetypal or simplified presentation of how the privileged exploit the have-nots.

Chattopadhyay also subtly attaches human emotions and values that are gradually degraded with the growth of financial crises and in the wake of a materialistic lifestyle. The characters are mostly archetypal and present different classes of society who eventually also become embodiments of changing ideas. 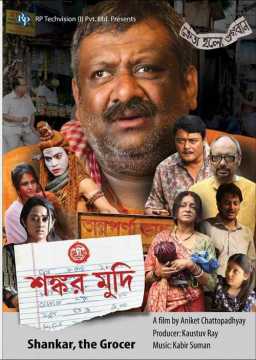 Shankar (Kaushik Ganguly) is a simple and compassionate owner of a grocery. For him, selling the products of daily needs is not only related to making a profit, but also about making sure whether his regular customers, who are also his neighbours, are leading satisfying lives even if he hardly manages to have a good lunch in a week with his meek wife (Sreela Majumdar).

His locality of Gargachha is a warm locality where everyone knows everyone else and comes to the help of those in need. Kali (Saswata Chatterjee) is an autorickshaw driver and also the local tough with the heart of gold. Naran (Kanchan Mullick) is a barber. There is also a tailor (Biswanath Basu) and an unemployed fellow who always loiters around with Kali.

These people are often looked down upon by an educated, middle-class man (Anjan Dutt), who stops by now and then to lecture them and criticize their ways. However, when it comes to taking the sick father of a lonely daughter (Priyanka Sarkar) to hospital or rescuing a girl from committing suicide, Kali's gang and Shankar always take the lead, not the educated and apparently wise man.

The friendly equation among the residents begins to change when a shopping mall is constructed not very far from the locality after the election and the local MP (Shantilal Mukherjee) forcibly becomes the sole authoritarian figure of Gargachha by manipulating the simple, uneducated people. While Kali senses the decline; Shankar and Naran try their best to survive.

The story revolves around the narrative of Shankar, who goes one day to visit the shopping mall and is amazed to see the supermarket there. The shopping mall kills not only his business, but also that of Naran, who is hardly aware of the difference between the hair styles of Salman Khan and Shah Rukh Khan. It also kills the business of another local tailor (Ankitaa Chakraborty), to whom nobody comes for stitching clothes, now that readymade branded garments are easily available at the mall.

However, Shankar remains optimistic and tries to lend his shop the look of a supermarket but in vain. The educated man scoffs at his futile attempts; his customers, who would regularly buy daily groceries from him on credit, do not seem to find it difficult to buy items in lots from the supermarket. Simple Shankar is baffled to understand the change and keeps trying to serve his customers, whom he considers his gods, till the moment he completely gives up.

In this struggle for survival, while some perish, others give in to the lure of globalization. The people who could easily kill the business of their local barber and grocer to keep themselves 'up-to-date' eventually find themselves alone. Before they can make sense of the changing reality around them, the warmth and bonding of their locality is gone. Only people like Dutt's educated middle-class man watch in silence when somebody cries for help.

The film's climax determines its political approach more than any other portion. The film is engaging for the most part as all the characters have their own stories to tell. In the struggle for survival, it is Shankar's genuine attempt to lend completeness to his family that makes his character more real than just an archetypal one and forms a core story that feeds the audience.

The character of a drunkard son-in-law (Jisshu Sengupta), who forgets his way home every day, because it doesn't belong to him but to his in-laws, brings a touch of absurdity to the whole story. He has a single conversation with Shankar that reveals a lot about his oppressive life.

The incorporation of the return of a son, who had been missing for years for engaging in radical politics, does not add to the length of the story but hints subtly at the contemporary political situation.

Each of the artistes in the film has been wisely cast and all of them deliver their best in their respective roles. Kaushik Ganguly brings alive multiple shades of his character with his nuanced yet impactful performance, making the audience feel every moment.

Anjan Dutt is real as the thick-skinned and hypocritical good-for-nothing representative of the educated middle class. Saswata Chatterjee is a bit over the top in the intense sequences but shines in the comic moments and when he exerts his command as the local toughie.

Kanchan Mullick, Biswanath Basu, Ankitaa Chakraborty, Sreela Majumdar, Priyanka Sarkar, Jisshu Sengupta all establish the contributions of their respective characters to the story with their minimalistic acts. Shantilal Mukherjee is realistic as the cold-blooded MP while Rudranil Ghosh is adequately dramatic as the impressionist.

Shirsha Roy's cinematography brings out the dichotomy between the receding world and the emerging one with appropriate camera work while Sanjib Dutta does justice to it with different colour tones in presenting the locality and the supemarket that appears blurry and is out of Shankar's reach. The steady camera work also helps to retain the realism in the depiction.

None other than Kabir Suman could have done justice to the music of a film that only speaks for humanity in the light of political games.

The well-written film is initially entertaining as the life of the characters is happy and peaceful. It eventually takes a grim and serious turn with the progression of the plot.

Shankar Mudi is essentially a political film that shows how power mongers change the dynamics of a society, sacrifing values and humanity. The film is engaging, yet it can only be exhausting, as it deals with a bygone era. The multiplex audience might not be comfortable watching a film that celebrates the essence of the single-screen era.