Shadaa review: To wed or not to wed, that is the question

The latest offering from the Diljit Dosanjh-Neeru Bajwa pairing is a laugh riot that, interestingly, tells you both the ills and benefits of married life.

Written and directed by Jagdeep Sidhu, Shadaa marks the return after four years of the super-hit pairing of Diljit Dosanjh and Neeru Bajwa. In a recent interview, Bajwa confessed she did not even know the story of Shadaa till the first day of the shoot, but she knew the director and has worked extensively with Dosanjh, so she was sure this would be a film she wanted to do.

This is exactly like the expectation the audience has when it comes to a Diljit Dosanjh-Neeru Bajwa starrer. We know the film will be a comedy with the promise of rollicking laughter. And the pair never disappoints you, as Shadaa is yet another comedy entertainer, complete with clever dialogues and foot-tapping music.

The story is set in the aptly titled village Suhagpura, where lives a wedding photographer who is a shadaa, or bachelor (Dosanjh), raring to get married. The only problem? He cannot find a willing bride. 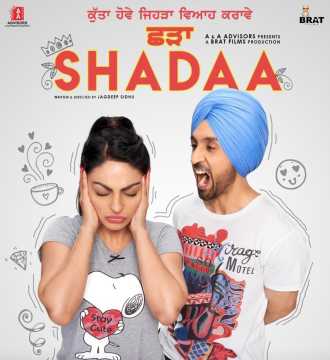 The entire village teases him about his unmarried status. Desperate, he tries everything — from looking at every young woman as a potential suitor to consulting a pandit about his ill-luck, when fate brings him face-to-face with a wedding planner (Bajwa) who is a shadi (bachelorette).

Seeing this as a godsend, Dosanjh finds the stars shifting in his favour and the wedding dhols literally start ringing in his ears as he sets off to woo Bajwa.

But there is a hitch. She has rejected 365 proposals so far and is not interested in marriage! In fact, she convinces Dosanjh that marriage is completely unnecessary, and he begins to highlight the ills of marriage and sings the praises of the freedom of being a bachelor, vehemently declaring, “Kutta hove jera vyah karavey [He who gets married becomes a dog].'

To convince his parents that marriage is indeed a form of imprisonment, Dosanjh brings home a doll, lovingly named Kylie (read Kylie Jenner for all die-hard Diljit Dosanjh fans), and gives his mother a taste of what his marriage would mean for her. Just when the mother is also convinced about his decision, the ground shifts again.

Besides the general hilarity that ensues in the film, certain moments that stand out, like the genuine care and affection the parents share for each other, or the fact that Bajwa’s character is slightly older than Dosanjh’s, which becomes the butt of jokes for him and has no real bearing on his choosing her as a partner.

There is also a salute to the legendary but controversial singer Chamkila, whose provocative songs about modern-day relationships shook up traditional sensibilities. In a similar vein, the film presents us with the idea of a modern bride, one who is unwilling to mutely do her husband’s bidding and accept the patriarchal order.

Rather, Bajwa’s character is that of a successful, working woman who is in charge, confident about her choices, and would like to clink glasses and share a drink with her partner at the end of the day. This remains a crucial point to make and in weaving the theme skilfully along with fun and games is where the true strength of the film lies.

Sonam Bajwa dazzles in this tragic love saga with a faltering screenplay....

Navneet Kaur Drall’s film leaves much to be desired in this superficial study of the plight of...

Through the musical journey of its protagonists, Jass Grewal’s film pays tribute to the rich...