Ram Kamal Mukherjee pays his tribute to the late National award winning director and cultural icon, Rituparno Ghosh, through his short film Season's Greetings. To find out how, one has to watch the film till the end. Featuring Lillete Dubey, Celina Jaitley and newcomer Azhar Khan, the film is woven around a story of relationships.

The film puts forward the idea of an individual's right to choose one’s religion and lifestyle, even in romantic relationships. The characters in the film are individualistic and they don't compromise on their faith and beliefs while forming relationships. Romita (Jaitley) makes it clear to Usman (Azhar), her live-in partner, that she won’t change her name and religion post their marriage, and he agrees. This sets the tone for the rest of the film.

With Sucharita (Dubey), Mukherjee has been able to retain a certain air of mystery, as she can be seen reading a letter full of yearning in the beginning. When Prabhatendu Mondal’s camera moves over images of mementos, carrying memories, it creates a world for Sucharita, one that has many colours and shades, but is best kept secret. Art director Goutam Basu has done a good job in making Sucharita a part of her surroundings.

While Usman’s sensitivity towards family and relationships is well established from the beginning through his conversations with Romita, the latter and her mother (Dubey) gradually unfold their narratives. The exposition of the characters’ narratives mostly takes place through conversations between Romita and Usman, and then a little bit between Romita and her mother, and finally, between Usman and Sucharita.

The conversations are directed towards certain revelations in the climax and hence, lack spontaneity. Rather than engaging the audience, they seem to be scripted to particularly reveal certain elements about the characters. The mundane drawing room exchanges, bereft of action, drag the narrative.

For most of the film, Romita seems happy with her lifestyle and the way she was brought up. But she also seems to retain an idealistic view on her parents' relationship. Even though they have been separated for 15 years, she believes that they will get back together some day. Her mother’s conversation with Usman and their meeting suggests that Romita hardly bothers to keep in touch with her mother. But when she meets her mother again after a long time, she wants to know all her secrets.

A lot happens towards the climax, which also reveals the true colours of Sucharita and Romita. Usman seems to have a neutral stance, thus maintaining a balance between the two women. His identity as a traditionalist with a flexible outlook on life helps weave a connecting thread, especially when Romita refuses to accept her mother’s independent choices, despite living an uncompromising life herself. Romita’s idealism is shattered when she gets a hint of her mother’s private life. 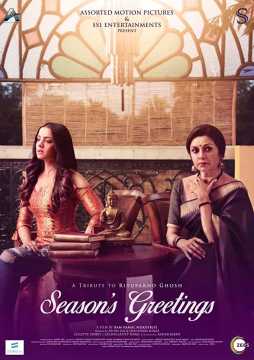 The revelations about the house unfold more colours in Sucharita’s life. But strangely, she proudly declares that the house was gifted to her by her husband, yet at the same time, she repeatedly claims that she has not been in touch with him for a long time. For a moment, she seems to be in love, but in the next, she makes it clear that what they shared was a toxic relationship.

Dubey’s performance is the most endearing part of the film. With her act, she manages to imbue life even into the dull conversation with Usman about his hobby. Her expressions in the final scene are quite dramatic.

Jaitley and Khan both deliver consistent performances, but without much dramatic variation.

Rabindranath Tagore’s song, 'Sajani Sajani Radhika Lo' has been used beautifully in the last sequence. Shailendra and Sayanti’s background score in the beginning sets a poetic tone for the movie, which is not consistently retained by editor Subhajit Singha.

Season's Greetings requires patient viewing, at least till the latter half of the film, where the story takes dramatic turns and gives certain cues which raise expectations. The message is undoubtedly important, but the film lacks the poetic finesse with which it begins.

Season's Greetings is currently streaming on Zee5 as part of its short film festival.