Satyameva Jayate review: Worth raising this slogan once

The promos of director Milap Milan Zaveri’s Satyameva Jayate displayed all its commercial elements and left a sour aftertaste. The film is a reminder why one shouldn't judge a book by its cover.

Satyameva Jayate is by no means an original or impressive piece of cinema. But it has all the ingredients required if you do not mind those old-fashioned hero-centric action entertainers.

The film starts with Vir (John Abraham) mercilessly setting a cop on fire. He repeats the exercise on two other police officers.

The case is handed over to the honest and reliable DCP Shivansh Rathod (Manoj Bajpayee). Rathod quickly realizes that the cops killed were corrupt. But that does not earn the perpetrator any sympathy from the tough officer who is hell-bent on nabbing him.

The film's trailer actually revealed a lot, including Vir’s back story. Thankfully, this does not hurt while watching the film. Writer-director Milap Zaveri knows what he is doing, at least for a major part of the film. Satyameva Jayate is shamelessly a no-brainer, and, thankfully, it does not pretend to be anything else.

The protagonist seems odd in the beginning, but you soon start feeling for him and his mission. The character and his antics bring in a number of applause-worthy moments which are likely to be lapped up by the dwindling single-screen audience. The scene in which a character offers namaaz while the 'Shivam stotram' plays in the background is the biggest paisa-vasool moment.

There is a tendency for films in this genre to lose steam aftger the interval. Thankfully, Satyameva Jayate does not suffer from this drawback.

However, it is plagued by other issues as it nears the finale. The manner in which things happen so conveniently, including the way people are related to each other, becomes unintentionally funny. One such twist reminds the viewer of the classic Deewaar (1975). 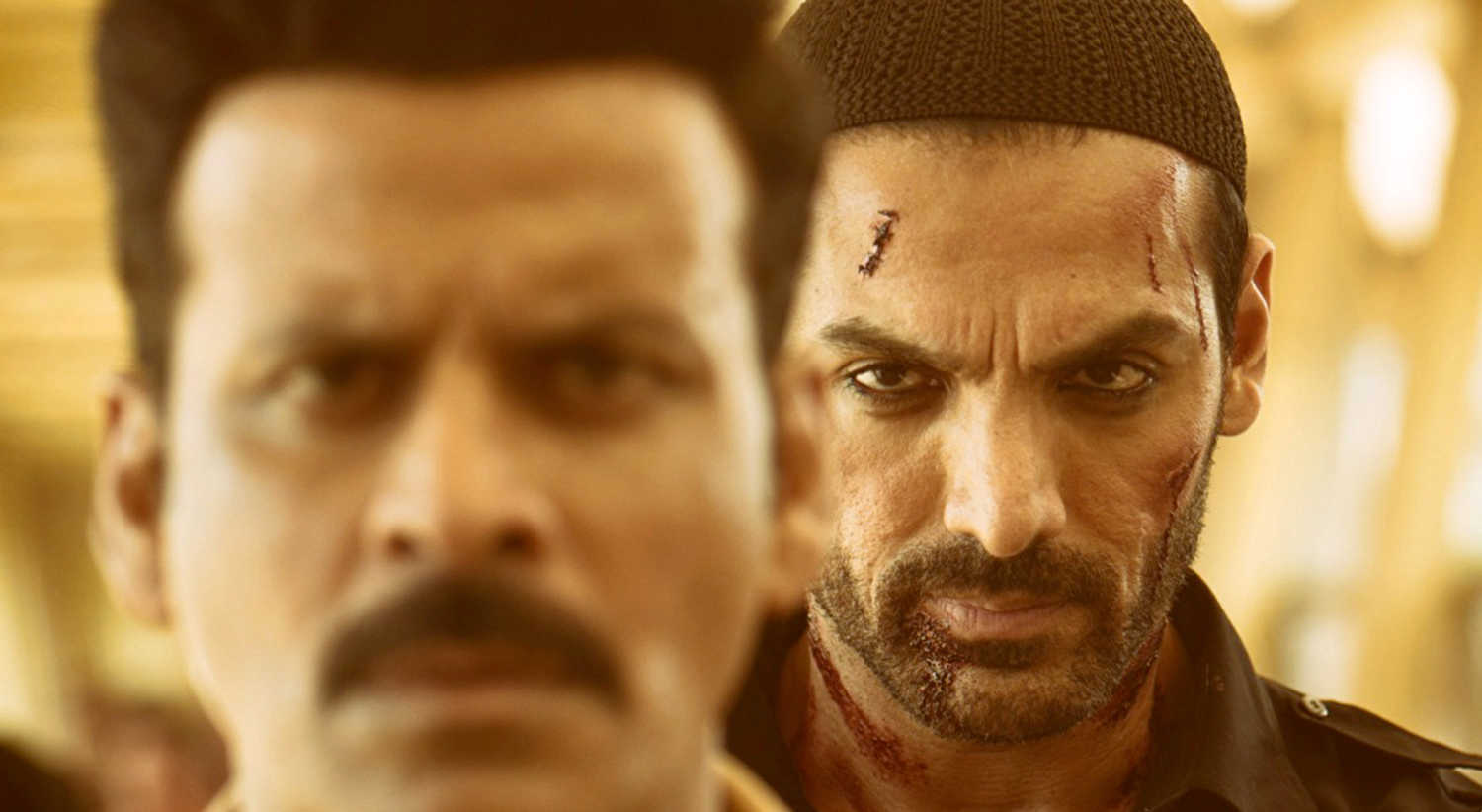 The climax not only becomes predictable, but also constantly makes you question the logic for it.

An important part of the cat-and-mouse game between Vir and Shivansh needs special mention. Vir’s first three victims are from police stations whose names begin with the letters S, A and T, respectively. This is enough for Rathod to guess that the next victim will be from a police station at a place starting with Y since the killer’s aim is to complete the words Satyameva Jayate. As if this weren’t enough, Vir hints at a major giveaway about his identity later on.

Despite its absurdity, this alphabetical idea generates some thrill, so you somehow accept it. But, strangely, the idea is later just thrown away and forgotten in the second half. Well, why did the filmmaker make such efforts to convince the viewer about it in the first place then?

We are also not told why Vir decides to finish off corrupt officers now when he has been seeking vengeance since he was a kid. There is no trigger for his actions, as if he just woke up one fine day and decided to finish off these evil policemen.

Cinematographer Nigam Bomzan's shots are simple and fit the bill. The background score succeeds in supporting the plot though it is too loud at times.

Among the actors, John and Bajpayee get maximum footage. Despite his limited abilities, John displays a lot of power, which is enough to make you root for his character. But you can't help feeling that a better actor would have enhanced the effect, especially during the emotional scenes.

Bajpayee, among our finest performers, lives up to his reputation, whether it is mouthing powerful lines or displaying emotions. On an unrelated note, after Naam Shabana (217) and Aiyaary (2018), this is Bajpayee's third film in recent times where his character is mostly speaking on the phone.

Debutant Aisha Sharma doesn’t have much to do. She has some screen presence, but her voice is a problem. Manish Chaudhary is the surprise package with a mature performance as the police commissioner. Well-known Marathi actress Amruta Khanvilkar, who was praised recently in Raazi (2018), is wasted in an inconsequential role. Chetan Pandit, as John’s father, leaves an impact in a cameo.

Satyameva Jayate has its flaws, but the film will sate the appetite of those who love the good old hero-centric commercial films.