Satellite Shankar review: Sooraj Pancholi and the film get sidetracked in more ways than one

The young actor channels mentor Salman Khan as he travels up and down India in this Irfan Kamal drama.

Rifleman KPG Shankar (Sooraj Pancholi) is a popular young man at an army base near the Line of Control in Jammu & Kashmir. With the help of a childhood toy, resembling the lord Shiva, he is able to transform any situation into the positive and earns the nickname ‘Satellite’.

Early on in the film, he and another soldier are injured in a skirmish involving Pakistani soldiers at a border outpost, thereby gaining bed rest. Shankar seeks to transform his eight days of repose into a trip home to Pollachi, Tamil Nadu, to get his mother to undergo a cataract operation.

Shankar charms his way into convincing his senior and he’s off, loaded with goodies from his army mates for their families back home. They will meet him as his train makes its way from Kashmir to Tamil Nadu. 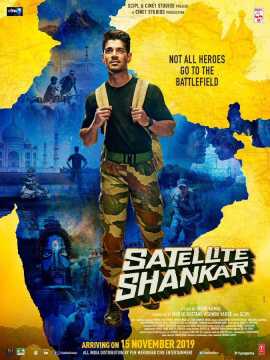 Now, young Shankar is a do-gooder who just can’t resist helping anyone out, and he ends up missing his train, not once but twice, as he helps his fellow travellers out of the goodness of his heart. He helps an elderly couple find their way, and rescues a young boy’s father from a burning bus. In short, Shankar is Superman in disguise.

As his travel plans go awry, he ends up meddling in the family lives of his fellow soldiers who are unable to make it home. The film continually reminds us of all that soldiers sacrifice and miss out on as they fight for the country’s security and safety.

Writer-director Irfan Kamal presents Shankar as the exemplary soldier and a deadly fighter. The character and his characterization walks a fine line between endearing and irritating. Sooraj Pancholi, who looks the part, isn’t able to muster much charisma with the role as a half-Tamilian, half-Punjabi army boy. He is mostly channelling his mentor Salman Khan, reminding us of the latter’s turn in Bajrangi Bhaijaan (2015).

Additionally, the film is scattered and works in bits and pieces. Palomi Ghosh is an overeager vlogger whose online portal 1 Mb of Truth posts and searches for the heroic Shankar as he tries to make his way home. She helps take his story to the entire country and the people rally to aid him as guardian angels along the way.

Megha Akash, in her Hindi debut, is a prospective suitor for Shankar set up by his family. Initially, Shankar’s interest in her is superficial, but their interactions (she with her broken Hindi and he with his basic Tamil) in the second half as they scheme for him to return to his base are quite entertaining. The film’s narrative is filled with too many elements to justify the nationalistic and patriotic fervour of a soldier’s journey.

We are to take many leaps of faith to believe that Pancholi is an injured soldier who is able to converse in almost any Indian language, thanks to his ‘satellite’ abilities. At one point, he imitates the prime minister, complete with a booming 'Mitron', almost scaring a taxi driver in the process.

While the film’s core idea is sympathetic to the everyday plight of Indian soldiers, it glosses over the actual politics in the former state of Jammu & Kashmir and becomes quite cringe-worthy in the finale.

The message of Indians uniting, overcoming hate and prejudice, gets lost in the overall preachiness of the feature. Moments meant to endear become corny and eventually tiresome. But Pancholi continues to soldier on, pardon the pun, despite the sluggish script. And though he succeeds in his ‘mission’, he can’t save the film.