Sarpatta Parambarai review: Pa Ranjith’s boxing drama is about one man’s fight for equality and glory

Arya plays the man Kabilan, who comes from a community that has been denied basic opportunities and due recognition, and he must fight for all that to change.

Pa Ranjith’s Sarpatta Parambarai, unlike his recent movies, doesn’t openly discuss things like oppression and caste discrimination which had got him branded as an anti-caste filmmaker. Breaking away from the image trap, Ranjith’s film is a straightforward, absorbing boxing drama about the clash between two popular clans — Sarpatta and Idiyappan — that ruled North Madras in the 1970s.

At the same time, it is an important story about one man’s fight for equality and glory. Arya plays the man Kabilan, who comes from a community that has been denied its basic opportunities and due recognition, and he must fight for all that to change.

Sarpatta Parambarai is predominantly about the clash between two warring boxing clans and how their rivalry has taken different forms over generations. While it is a sports drama that takes a familiar route of storytelling, Ranjith makes some interesting observations about the oppressed community that has been fighting for its place for many years.

Arya’s Kabilan grows up watching boxing matches and idolizing the local boxing legend Rangan (Pasupathy). Though Kabilan craves an opportunity to prove himself, he is robbed of his dreams because he hails from a community that has been sidelined.

What makes Sarpatta Parambarai interesting, apart from being a highly entertaining boxing flick, is that it doesn’t position itself as a film that openly questions the caste system and the politics associated with it. It discusses a lot of these issues on the surface which never feels forced.

Sarpatta Parambarai is that rare film that doesn’t rely on its hero alone to make it accessible to the masses. It is not until the 50th minute that Arya gets a proper hero elevation scene. Till that moment, the film keeps him sidelined and all the focus is on the other key characters — from Rangan to Vembuli (John Kokken) and Dancing Rose (Shabeer Kallarakkal). 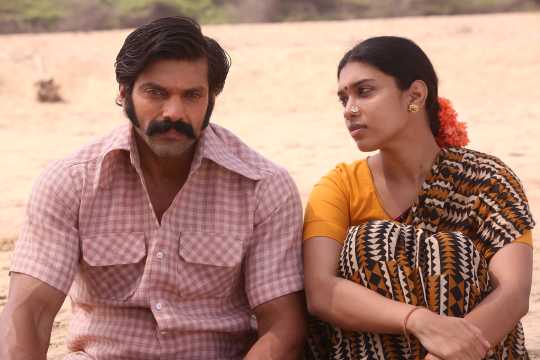 The women also get pivotal parts to play, and they make such a strong impact. Anupama Kumar as Arya’s mother, Dushara Vijayan as Kabilan’s wife and Sanchana Natarajan are the film’s biggest catalysts. It is refreshing to see John Vijay, who is mostly wasted in silly roles, play an important character who is both a father figure and a sidekick to Kabilan, and the scenes between them are some of the best moments of the film.

Shabeer as Dancing Rose is another interesting negative character with some ethics. Though he fights on behalf of the Idiyappan clan, he is someone who believes in a fair fight.

Arya shines as Kabilan and this character will go down as one of his best works. With the project having taken more than two years, watching Sarpatta Parambari on the big screen would have been a cracker of an experience. The period setting of 1970s Madras and the detailing that has gone into the recreation of a bygone era would have made for a terrific theatrical experience.

The boxing sequences also deserve special mention. The fights don’t match up to professional standards, but they have been choreographed in such a way that they keep you engrossed till the very end.

Sarpatta Parambarai is already a contender for best film of the year. But more importantly, it will be remembered as the film that marked Ranjith’s return to form. This rousing story of an underdog’s triumph set against the boxing culture of North Madras is unmissable, simply because it’s more than a sports drama.