Sarkar is the weakest of Murugadoss’s three films featuring Vijay, and that’s putting it politely.

Sarkar is the third South Indian political film of the year after Mahesh Babu’s Bharat Ane Nenu and Vijay Deverakonda’s Nota. The common factor among all these films is the idea of a new-age politician blossoming from the masses and taking the system head-on.

Exciting as it sounds, and much as these films have tried to do justice to the idea within the commercial format, for a lot of audiences Shankar’s Mudhalvan (1999) remains the true-blue political film, thanks to the cult status it has gained over the years.

AR Murugadoss’s Sarkar, his third outing with Vijay after Thuppakki (2012) and Kaththi (2014), is built on the premise of the importance of voting and how even a single vote can make a difference. 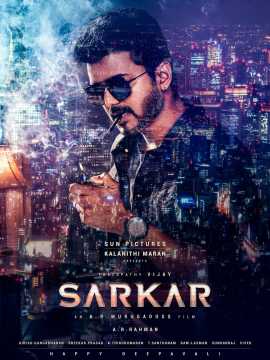 When Sundar Ramaswamy (Vijay), a ruthless corporate monster, arrives in Chennai to cast his vote on election day, he realizes his vote has already been cast, fraudulently. He decides to dig into the matter, only to stir up a political hornet's nest. The events that follow form the crux of Sarkar.

Sarkar, which focuses on corruption in politics and voter cynicism, asks all the pertinent questions, but none of this is new. However, it can take credit for popularizing section 49-P (a voter can demand to vote again if someone has cast his/her vote fraudulently) in Indian election law.

Murugadoss, instead of writing a strong political core and offering insights into real politics, relies heavily on recent events that challenged the political system in Tamil Nadu. Jallikattu, or the bull-taming festival, is one of the examples that are used quite often lately whenever Tamil filmmakers have to talk about politics. There are also emotional mentions about the suicides of farmers, the killings of fishermen in Sri Lankan waters, and public apathy. These scenes fail to create any emotional connection. Worse, they fall flat owing to Vijay’s slightly exaggerated performance.

If we were to compare Sarkar with Murugadoss’s previous works with Vijay, this is undoubtedly his weakest film, and that’s putting it politely. Both Thuppakki and Kaththi, despite being commercial potboilers, had engaging screenplays that were elevated by Vijay’s screen presence. But much as Vijay tries to control the show in Sarkar, it becomes unbearable after a point, especially in the second half when he takes the support of the public and the 'Oru Viral Puratchi' song plays in the background.

By the way, our filmmakers seriously need to take some classes to understand the concept of viral marketing on social media. The way social media is used as a tool to communicate in the film is a joke.

Sarkar is Vijay’s show all the way, despite the presence of Radha Ravi and Varalaxmi Sarath Kumar, who are promising in their roles to an extent but don’t get much scope to perform. AR Rahman’s music is another weak link in the film. The songs are just disappointing. The 'Top Tucker' number is used god knows how many times as the background score in most crucial scenes. For a project of this scale, the music is such a downer.

Murugadoss’s bad form continues with Sarkar, which would have fallen flat on its face had it featured any other actor in the titular role. Vijay, with his earnest effort in a not-so-memorable role, saves the film from going down the drain.

Thalaivii review: Kangana Ranaut’s film is an ode to Jayalalithaa’s rise into a powerful leader

Unlike most biopics, especially those on popular politicians, Thalaivii neither tries to sanitize It...

The short film follows a Northeast worker trying to earn a livelihood in South India, only to one...