In Sarileru Neekevvaru, Anil Ravipudi lets Mahesh Babu reinvent with a role that makes him deliver a refreshing performance.

Thankfully, he breaks the monotony in Sarileru Neekevvaru (2020), in which he plays a soldier, but he gets to have lot of fun on screen. Anil Ravipudi lets Mahesh Babu reinvent with a role that makes him deliver a refreshing performance. 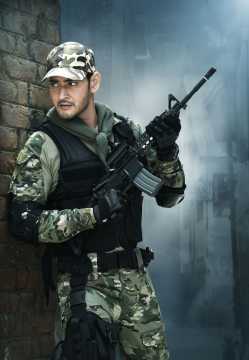 Sarileru Neekevvaru is a very generic story of a soldier (played by Mahesh Babu), who comes to a small town to save a family from the clutches of a rowdy politician (played by Prakash Raj). The way Anil Ravipudi treats this generic story with elements such as comedy, drama and action in the right fashion is where he stands apart from his contemporaries and he makes a strong impression yet again.

The film allows Mahesh Babu to explore his comic side after a long time and his performance is reminiscent of what made him popular in films such as Khaleja (2010) and Dookudu (2011). It’s a space he’s so comfortable in, and he performs with ease and it’s a joy to watch him play this character.

Even though Mahesh plays the hero, the machismo of his character is used to elevate Vijayashanti’s character and that’s commendable on the director as well as hero’s part. Not many stars would be comfortable with the idea of playing a second fiddle of sorts to a female character, but Mahesh has so no such qualms in the film. Also, he gets to shine on his own and have scenes in which he’s heroic and gets to be the crowd-loving star.

Sarileru Neekevvaru has a sub-plot about soldiers and all the sacrifices they make for the sake of the nation. Initially, this segment sticks out like a sore thumb and comes across as a stretch purely included to elevate Mahesh’s character. But by the end of the film Anil gives a solid closure to the army sub-plot.

Prakash Raj returns to play a villain and he pulls off his character with ease, proving once again his versatility when it comes to the role’s different dimensions. Rashmika Mandanna has to be the most energetic leading lady in Telugu cinema currently. She breathes so much energy into her character and underneath all the silliness; it’s not an easy role to essay.

If there’s one area where the film falters, it’s the music and composers Devi Sri Prasad disappoints with easily forgettable songs.

Syeraa Narasimha Reddy takes an inspiring story from the past and presents it in the most popular,...

The film is predictable in parts, but that doesn’t make it any less entertaining, though it in...

Dear Comrade is mostly beautiful, and it’s well written, but it has some problematic portions....