Arjun Kapoor plays a devoted grandson determined to fulfil his grandmother’s wish in this lacklustre directorial debut by Kaashvie Nair.

In Kaashvie Nair’s directorial debut Sardar Ka Grandson (2021), Neena Gupta plays nonagenarian Rupinder Kaur, lovingly called Sardar. Terminally ill, the still feisty old-timer has but one wish in the world. She wants to return to the old house she had built with her late husband Gursher Singh (John Abraham) in Lahore.

She conveys her wish to her NRI (non-resident Indian) grandson Amreek (Arjun Kapoor), who is having a bit of a crisis himself. He is processing a recent break-up with his fiancée Radha (Rakul Preet Singh), with whom he also shares a business, a moving and packing company called Gently Gently in Los Angeles.

Back home in Amritsar, Punjab, Amreek is unable to think about disappointing Sardar and sets off to make her last wish come true.

While the film is focused on Amreek and his impossible task (hence the title), it doesn’t do Sardar enough justice. Nair’s script, co-written with Anuja Chauhan, tries to pack in too much. As a result, the film is stuffed with details that don’t pan out. There is a subplot about a competitive cousin Lovely (Ravjeet Singh) and the battle for the family’s cycle business that is floated but rushed over in the end.

The film also delves into Sardar’s youth, where Aditi Rao Hydari plays her in the pre-Partition flashback scenes. Hydari is lovely as usual, but again the screenplay comes up short when dealing with Sardar’s past. Producer John Abraham doesn’t get time to fully register as the larger-than-life Gursher, whose memory Sardar still cherishes.

The story feels an awful lot like Kapoor & Sons (2016) where Rishi Kapoor also played a nonagenarian whose family reunites in view of his failing health. He, too, has a last wish to be fulfilled with his family.

In Sardar Ka Grandson, a problem arises when Sardar is blacklisted from entering Pakistan and Amreek has to get creative and enlist Radha’s help in moving Sardar’s house from Lahore to Amritsar. The second half moves into a tale of cross-border cooperation as Sardar's old neighbourhood in Lahore comes together to help Amreek relocate the ancestral house.

Mir Mehroos, the scene stealer from Chintu Ka Birthday (2020), is delightful as a young Pakistani tea-seller who becomes Amreek and Radha's biggest support. He also has the best line in the film when he says, “Apka desh chaiwallon ko bahut underestimate karta hai [You Indians keep underestimating tea-sellers]."

But when the action moves to Pakistan, it reels into amateurish and slapstick territory as Amreek faces obstacle upon obstacle. Of course, a villain is also introduced the form of Kumud Mishra’s Aqlain Niazi. He plays the petty mayor of Lahore who has a longstanding feud with Sardar that he refuses to let go of. 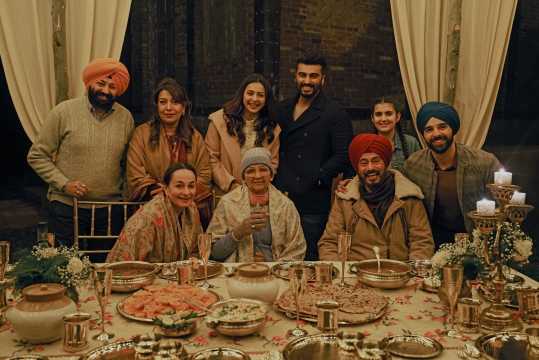 The scenes in which Sardar and Amreek cross the border echo each other and are nicely handled. However, it is obvious that the film is not shot in Pakistan (or Los Angeles) and it is riddled with continuity errors that cannot be ignored.

Moreover, the film’s runtime of 139 minutes feels stretched in the second half as Amreek and Niazi constantly have a go at each other. The family drama is meant to be heartfelt but comes across as trite.

Neena Gupta tries her best as Sardar, but in the film’s finale, her condition just does not seem believable. Arjun Kapoor lacks the emotional heft to bring the story home. His performance veers from the petulant to the earnest as the film progresses.

Sardar Ka Grandson has big scale and heart but doesn’t always translate that properly into the feature film. Gulraj Singh’s background score does its best to amp up the emotion, but ultimately the expected ending feels a bit hurried and incomplete.