The dark thriller by Dibakar Banerjee, starring Arjun Kapoor and Parineeti Chopra, holds plenty of surprises but takes forever to show its hand.

Dibakar Banerjee’s Sandeep Aur Pinky Faraar (2021) opens on a violent murder which then leads to the title characters’ flight. The nearly five-minute sequence switches points-of-view giving us the larger picture by the end. Writer-director Banerjee reels us in with an intriguing introduction, but as the movie progresses and we find out why these two are targeted, the feature doesn’t deliver as it should.

Like the title, the movie would have us believe that the less we judge things by their appearance, the better. So the aforementioned Sandeep is not Arjun Kapoor, but Sandy Walia aka Sandeep Kaur (Parineeti Chopra), a prim-and-proper high-flying banker. And Pinky isn’t Chopra but Kapoor’s character, Satinder Dahiya, a beefy suspended Haryana cop, who is conveniently nicknamed Pinky here.

The two are thrown together one night when Pinky has to escort Sandeep to an unknown location at the request of her smarmy boss Parichay. When they learn that there is a hit on them, they are shocked, and later begin to make a plan. Figuring the best way to escape would be to leave the country and assume a new identity, they head to a small town near the Nepal border. 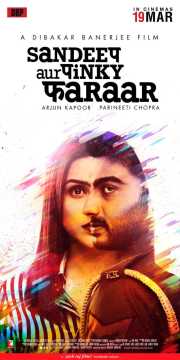 There, they end up lodging at the home of a squabbling middle-aged couple, played by the always delightful Neena Gupta and Raghuvir Yadav, and making some valuable contacts. Meanwhile, Sandeep and Pinky’s former bosses are still on their trail, hoping to silence the duo, once and for all.

The screenplay by Banerjee and Varun Grover sets up an intriguing premise but meanders along the way with too many details. So we discover that Pinky is a Salman Khan fan and an accomplished dancer, but are vague on the details why he was suspended from the service in the first place. Meanwhile, the banker’s motivations for being involved in a multi-crore bank scam are also less than clear, as well as her recent awakening of conscience.

The pace of the feature is also languid at times, taking forever to get to the point. However, curiosity about the fate of the characters, dire or otherwise, tides one along. Banerjee also includes the casual misogyny Sandeep has to face both in the banking world and on the run, as she tries to hold on to what she can of her previous life.

Sandeep Aur Pinky Faraar is rightfully focused on Kapoor and Chopra, but the rest of the cast, including Jaideep Ahlawat as a shady boss and Rahul Kumar as a helpful friend, also leave a mark. But the leads are mostly hit-and-miss. Luckily, the emotional quotient of certain sequences is well-handled by them, but the lesser scenes required more heft.

Kapoor and Chopra started out their careers at practically the same time with Ishaqzaade (2012) and they have an easy chemistry as initial antagonists and later reluctant partners-in-crime. However, their performances can’t salvage this engrossing yet convoluted tale.