Directed by Satish Rajwade, the web-series has compelling performances by Swwapnil Joshi and Nitish Bharadwaj.

Satish Rajwade’s name has become synonymous with the three films he made for the Mumbai-Pune-Mumbai franchise. But the director has also tried his hand at mystery and intrigue in films like Gaiir (2009) and Aapla Manus (2018), and the television series, Agnihotra.

While Gaiir and Aapla Manus also had elements of romance or family drama, Rajwade's latest offering, Samantar, is a no-holds-barred thriller. Hence, it comes as no surprise that he has chosen to make a web-series out of it, which is being streamed on the OTT platform MX Player.

Based on author Suhas Shirwalkar’s book of the same name, Samantar revolves around the complicated life of Kumar Mahajan (Swwapnil Joshi). He is a typical middle-class man working with a government contractor. His job doesn’t provide him with enough money to fulfil the needs of his wife Nima (Tejaswini Pandit) and son.

Kumar is an atheist who, obviously, doesn’t believe in astrology or palmistry. But when his close friend and colleague (Ganesh Revdekar) persuades him to visit Swami (Jayant Savarkar), a renowned palmist, he reluctantly agrees. After studying Kumar's palm, Swami tells him that he had studied this palm before. Kumar is shocked as he has never visited any palmist or astrologer before, but Swami is adamant. 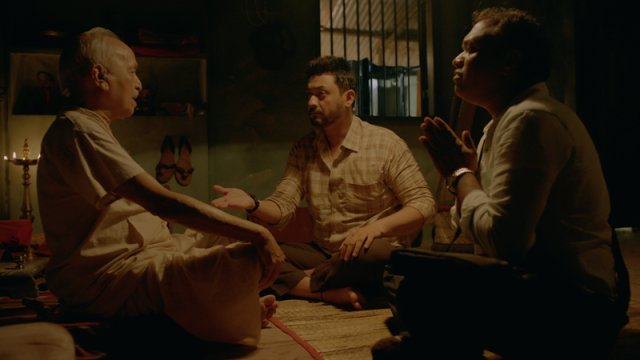 It is then learnt that Kumar's palm lines are similar to those of a man called Sudarshan Chakrapani (Nitish Bhardwaj) who had visited Swami years ago. Hence, that man’s past is likely to be Kumar’s future. Kumar now sets off on a mad search for Chakrapani in order to learn his future.

Shirwalkar’s basic story itself is naturally peppered with mysterious and thrilling elements. It has been smartly recreated by Ambad Hadap through his screenplay and dialogues.

In a feature film, a dramatic pause is only needed before the interval on most occasions. But the medium of web-series demands the same at the end of every episode. This need to have an interval-like pause is fulfilled here on most of the occasions.

Rajwade has handled his first thriller with finesse, just like a feature film. The realistic locations help immensely. The visuals have been brilliantly captured by cinematographer Prasad Bhende. The ploy of using a hand-held camera in certain tense moments works well.

Swwapnil Joshi carries the tag of a romantic and family-friendly hero, but he breaks away from it in this web-series. The actor completely gets into the character of the angry and verbally abusive middle-class man. He delivers one of his finest acts in which he speaks volumes through his expressions.

Apart from Kumar, the most important character in this web-series is Sudarshan Chakrapani. He is barely there for three episodes, but his impact is unforgettable. The man is as interesting as his name. His entry and the way he slowly approaches Kumar is full of mystery. Thankfully, the mystery of his character has still not been completely revealed.

Such a character rightfully required a mature act by someone of the calibre of Bharadwaj. The actor switches moods with ease. The scene where he speaks about life in a philosophical manner is reminiscent of the way in which he narrated the Bhagavad Gita as Krishna in BR Chopra’s classic television serial, Mahabharat (1988), which was his claim to fame.

Jayant Savarkar as Swami has only a couple of scenes, but you can also feel his presence throughout since it is his character who sets the wheels of the story in motion.

Samantar, however, is not beyond criticism. For instance, Kumar’s extreme anger towards Swami in the beginning does not seem justified. He doesn’t have a bigger reason to not believe Swami as the palmist did miraculously reveal certain sad incidents from Kumar’s life without even knowing him.

There is also a moment in the middle of the series where the pace seems to drop for a while. Also, the series leaves certain questions unanswered. But this isn’t a major issue for they may well be answered in the second season.

Vijeta review: A sports film minus the thrill of the sport

Subodh Bhave's earnest performance is the only saving grace of this poorly scripted drama....