The film, which doesn’t rely on major twists, works mostly due to its focused storytelling and, in spite of its slow pace, keeps one engaged till the end.

It would be no exaggeration to say that Malayalam cinema makes some of the best police procedural films in the country today. Rosshan Andrrews’s Salute (2022), which features Dulquer Salmaan as an officer destined to crack a long-standing cold case, is another in the long list of impressive cop thrillers from the industry and makes for a riveting watch. The film, which doesn’t quite rely on major twists, works mostly due to its focused storytelling and, in spite of being slow-paced, keeps one engaged till the end.

Dulquer plays sub-inspector Aravind Karunakaran, whose role model to join the force is his own brother, deputy superintendent of police Ajith Karunakaran (Manoj K Jayan). Aravind looks up to his brother and takes pride in working under him. Ajith leads a team looking for a faceless killer whose latest victim has got a local politician to bring pressure upon it to solve the case quickly.

The police nab a guy who they believe is responsible for the double murders but are forced to plant evidence to prove their case in court. However, the real criminal turns out to be someone else and the police, upon learning of their goof-up, decide to let the matter pass. Aravind’s conscience doesn’t let him be at peace, however, and comes in the way of him doing his job of following orders. To nab the real killer, he goes on long leave and starts to investigate the case on his own, earning the wrath of his own brother and his team. 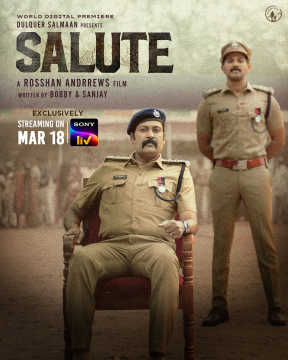 What really works for the film is the narrative style. Unlike most cop thrillers, Salute is in no hurry to make the hero catch the criminal. This isn’t one of those films where the twists blow you away either. In fact, the film rarely relies on twists. It spends time making the hero haunted by his own conscience and a faceless villain.

Every time we feel like the hero is close to nabbing the killer, the story takes a detour and Aravind hits a roadblock. Here, we don’t get a hero who is infallible and invincible but someone who is as vulnerable as anyone who is about to lose. The fact that the film never tries to glorify Dulquer’s cop is a major highlight.

After the breezy romantic comedy Hey Sinamika (2022), it’s refreshing to see Dulquer play a cop stripped of all heroism. He delivers a measured performance and makes us empathize with his character, someone who is torn between duty and family, right and wrong.

The conflict and tension between the brothers is another interesting angle that works in making the story engaging. The women have very little to contribute here and Diana Penty is wasted in a role that makes no impact.

Salute, which is an investigative thriller at heart, feels more like a film where a cop sets out to clear his conscience.