Sadak 2 review: This potholed road only leads to a dead end

The film starring Sanjay Dutt, Alia Bhatt and Aditya Roy Kapur only makes you wonder why Mahesh Bhatt came out of retirement after two decades.

Mahesh Bhatt’s Sadak (1991) was a love story and action film. It revolved around street tough Ravi (Sanjay Dutt), a taxi driver, who falls for Pooja (Pooja Bhatt), sold off by her uncle to a sex workers’ den run by an evil eunuch named Maharani (Sadashiv Amrapurkar). The rest of the film was about how Ravi rescues Pooja from Maharani while fighting his own demons.

Sadak was named so as the characters were all from the street. The only thing Sadak 2 has in common with the original film is that it takes place on the street, during a road trip. But in terms of story, theme, characters or treatment, Sadak 2 does not seem to be a sequel at all. Maybe that’s why we are shown flashes of the first film in between, so that we don’t forget this is supposed to be a sequel to Sadak. Even so, by the time the film ends, you wouldn't care.

Sadak 2 revisits Ravi’s life after 29 years. Pooja is no more and Ravi lives alone in some town in India where he runs his taxi service. He is so depressed after Pooja’s death that he is getting suicidal.

Then, out of the blue, Aryaa (Alia Bhatt) arrives. She is on a mission to destroy a fake god-man called Guruji (Makrand Deshpande) who killed her mother after brainwashing her father (Jisshu Sengupta). Her father’s second wife (Priyanka Bose) is an even bigger worshipper of Guruji. 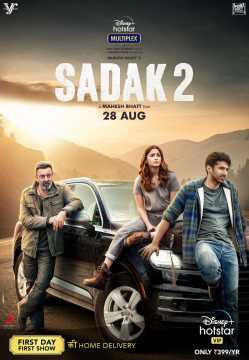 Aryaa has booked a cab from Ravi’s agency to visit Ranikhet in Uttarakhand, from where she can visit Mount Kailash. She is about to turn 21 in the next few days and it is her dream to visit Mount Kailash on her special day. All this while, she is on the run from Guruji’s men.

Now if you are wondering why someone would head to Mount Kailash while chased by goons, join the club. This is just one of the many strange moments in Sadak 2. And quite naturally, these flaws in the development of Aryaa’s character affect Alia Bhatt’s performance, though the actress tries hard to make her look sensible.

The script neither establishes the story nor the characters. This makes it impossible for the viewer to take either of them seriously. And then you have such Mount Kailash moments that make no sense. And it just keeps getting worse. Just to give you an instance, in one scene, Aryaa steals into Guruji’s den, scrawls ‘Badla’, meaning revenge, on a huge portrait of his, then sets it afire. So, why bother with the graffiti when no one is going to get to read it?

Sadak 2 sees at least three instances where a twist is introduced in the plot by the simple device of the three main characters blurting out their motives! Really? Can storytelling get any lazier?

But the weakest part of Sadak 2 is its main antagonist, Guruji. Sadak had a terrific villain in Maharani, portrayed menacingly by the late Sadashiv Amrapurkar. Here, however, the entire Guruji track is presented more like a spoof in laughter shows. And Makrand Deshpande goes completely over the top.

Hindi cinema has seen quite a few sequels lately that made you wonder why they were even made. Sadak 2 makes you wonder how the project was even okayed. Did Mahesh Bhatt return to direction after two decades only to deliver this dud?

The buzzy Netflix web-series has heart and this time around, soul as well....

The dark comedy, starring Janhvi Kapoor, has an exciting premise but is burdened with too many and...