Sabrina review: A must-watch thriller that throws light on rot that exists in unequal societies

Directed by Ashfaque Nipun, the series is a gripping tale about a doctor who struggles to overcome her own demons while seeking justice for her patient.

Ashfaque Nipun’s Hoichoi series Sabrina is a multi-layered story about a doctor who goes all out to seek justice for her patient who sustained major burn injuries under suspicious circumstances. The film is a gripping tale that exposes the rot in a society plagued by economic disparity and male domination.

The series begins with Dr Sabrina (Mehazabien Chowdhury), a burn injury expert, being called to the hospital on an emergency basis late one night. While attending to her patient, whose name is also Sabrina (Nazia Haque Orsha), she learns that she has survived an attempt on her life.

News reports reveal that the patient’s husband, a crime reporter Shawkat Hussain (Intekhab Dinar), is on the run. Deeply affected by her patient’s plight, Sabrina begins to uncover the truth.

The plot gradually reveals that Dr Sabrina is haunted by an incident of injustice, which led to the death of her sister. The non-linear narrative shows how Dr Sabrina turned into a deeply sensitive and able healer, who doesn’t hesitate to do the right thing while being labelled reckless by a flawed system.

As Sabrina’s quest continues, we get to learn about a housewife, who despite facing the brunt of her corrupt husband’s actions, refuses to compromise on her values. Shawkat, a spineless individual, gets manipulated by a fraudster while trying to earn a quick buck and ends up being party to a major political scam.

The series has a strong build-up with various twists and turns taking the plot forward. The show takes its time to establish the primary characters, who have been wronged by the system in some way or the other. 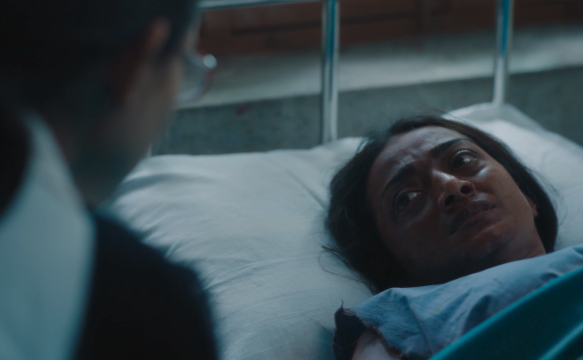 Sabrina is filled with moments where the complex relationship between the characters and their socio-economic circumstances are highlighted. Women here both face and expose the worst aspects of a societal structure where for most, being moral is a luxury.

Mehazabien Chowdhury delivered a balanced yet hard-hitting performance as a woman who stays true to her cause while battling her own anxieties. Her character is a strong woman, who vows not to falter at any point in her mission just because she was born a woman in a male-dominated society.

Nazia Haque Orsha is a natural as a wife, who in an attempt to compensate for her husband’s wrongdoings faces the most horrible consequences.

Intekhab Dinar’s portrayal of Shawkat Hussain exposes the conditioning that allows a man to exercise hypermasculinity while lacking foresight and a sense of responsibility.

Yash Roshan performs well as Abhi, a cartoonist at the publication where Shawkat works, who is the only empathizer of Dr Sabrina. Hasan Masood, as Shawkat’s sly landowner, is terrific in his portrayal of an out-and-out opportunist.

Barkat Hossain Polash’s cinematography is top-notch and evocatively explores how each character responds to their circumstances. Editor Jobayar Abir Peal has made the series even more intriguing by seamlessly playing with its non-linear structure.

Jahid Nirob’s background score is urban yet minimalistic and subtly sustains the tense mood of the series.

Sabrina has been brilliantly written and by organically building the characters over the first season, Ashfaque Nipun has generated anticipation for the next one. A brilliant thriller with strong social commentary, Sabrina is a must watch.

Sabrina is being streamed on Hoichoi.