This hard-hitting tale of vengeance is self-indulgent at times, but its exquisite visuals and top-notch performances are praiseworthy.

Arun Matheswaran’s sophomore film Saani Kaayidham is a straightforward revenge thriller in which a constable (Keerthy Suresh) and her step-brother (Selvaraghavan), who is from an oppressed caste, go after the men who sexually assaulted her and killed her husband and daughter.

But what really sets apart Arun’s film from regular tales of revenge is the way it treats violence, almost making it a cathartic process that one doesn’t mind cherishing as a viewer. Even though this hard-hitting tale of vengeance is self-indulgent at times, its exquisite visuals and the top-notch performances by Keerthy and Selvaraghavan are praiseworthy.

Keerthy's character, Ponni, lives for her husband and daughter. One day, her spouse gets insulted by his bosses, who are from the dominant caste, at the rice mill where he works, and he comes home drunk, swearing to never go back to work. But after Ponni changes his mind, he returns to work the next day, planning to offer an apology. However, he is subjected to even more humiliation. This time, something is said about Ponni, and he loses his cool and spits in the face of one of his superiors.

Unable to stomach this, the bosses go on to rape Ponni and burn her husband and daughter alive. After being let down by the court and police, she sets out on a journey of revenge with her step-brother Sangaiyyah. The rest of the movie plays out like an Indianized version of Kill Bill (2003). 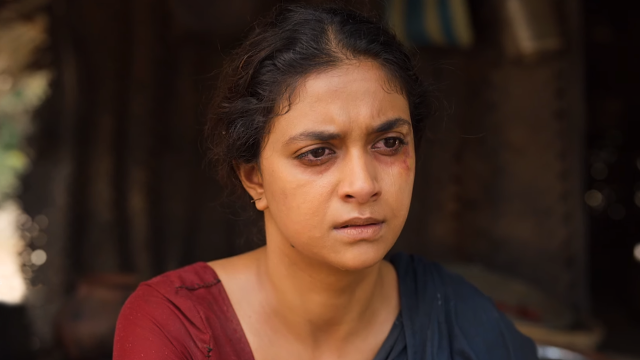 It’s a gory detail but Arun makes revenge feel so personal that you empathize with Ponni when she talks about inflicting so much pain. There are scenes of acid being poured on genitals and people being run over by a van. It’s definitely not a film for the faint-hearted. The story is divided into chapters and the narration is beautifully aided by stunning visuals and Sam CS’s score. Each frame feels like a breath of fresh air.

After delivering one of her career-best performances in Mahanati (2018), Keerthy went on to sign up for so many projects that most of her performances either went unnoticed or were not up to the mark. However, she makes her mark as a performer in Saani Kaayidham, which definitely seems to have pushed her out of her comfort zone.

Selvaraghavan, too, surprises with an immensely mature performance and often keeps the film alive from turning into a blood-soaked tale of vengeance. The brother-sister sentiment, sub-plots involving children and caste-based discrimination are aspects that add weight to Saani Kaayidham, which otherwise feels predictable most of the time.

Saani Kaayidham is being streamed on Amazon Prime Video.

With simplistic storytelling and relatable situations, especially for those who have a pet, Oh My a...