Robbie Grewal's film is an aspiring John Le Carre-esque drama that lacks the sharpness and tension needed to make it attractive.

John Abraham needs to be credited for his choice of scripts. Since Madras Cafe (2013), the actor has picked some interesting projects.

After following up with Parmanu: The Story Of Pokhran (2018) and Satyameva Jayate (2018), the actor's choice of Robbie Grewal's Romeo Akbar Walter (2019) needs to be appreciated.

The film is an engrossing, carefully crafted tale of the work that goes on behind the scenes to gather the information required by countries to win a war.

Sadly, it fails to capitalize on the tension and drama that could have elevated it to another level.

Romeo Ali (John Abraham) is an ordinary bank employee who is recruited by Srikant Rai (Jackie Shroff), head of RAW, or the Research and Analysis Wing, India's external intelligence agency, to infiltrate Pakistan and gather intel in the early years of the 1971 war for Bangladesh's independence.

Romeo takes on the identity of Akbar, only to find that the spy is a disposable pawn in a more complicated chess game. As he grows closer to weapons dealer Isaq Afridi (Anil George) who runs an arms nexus for the Pakistani army, he finds himself in a cat-and-mouse game with the ISI commander Khan (Sikandar Kher). From double-crossing spies to his own network compromising him, Romeo/Akbar is battling multiple odds.

The story, by Robbie Grewal, is detailed and an insightful account of how information is crucial to any warfare. It serves as a timely reminder when India has suffered numerous intelligence lapses in the past couple of years.

Grewal's story digs deep into the dynamic between the handler (Shroff) and the asset (John). The multiple strings at play in this puppet game are also clearly mapped out, making for an interesting plot. 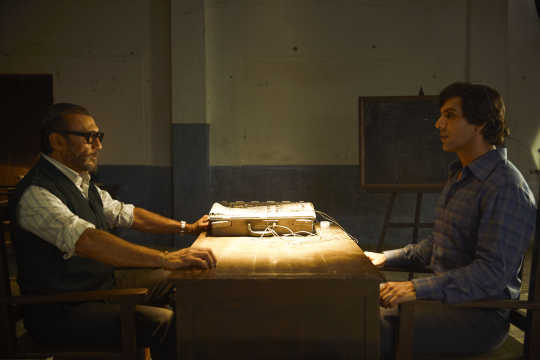 Where it loses out is in the screenplay. The film lacks the tension and suspense that are key to any espionage thriller. Once the basic premise is laid out, it is easy to map out the character arcs and discover the suspense.

The first half is more intriguing than the second. The clear indicators laid out through the dialogues do not help either. The turning of Romeo/Akbar into a Pakistani agent is a little unconvincing. There are several loopholes that give away key moments in the film.

The runtime of two hours 20 minutes also goes against the film. It lacks speed and focus. The shifting of viewpoints from Akbar to Shrikant to Sikandar Kher's Khan takes away from the tension of the plot.

John delivers as the stoic, brooding spy tasked with a heavy job. The actor is slowly getting into the groove of such characters. The counterpoint is that the brooding gets boring soon, making him come across as one-dimensional.

Jackie Shroff does what he can with a role that is as stereotyped as it gets. As the man with an eye on everything, Shroff is transformed from the bhidu next door to a more sophisticated handler.

It is Sikandar Kher who is the surprise in the film. The actor brings a Punjabi accent to play the single-minded obsessive spymaster tasked with rooting out a spy who can play the game. Kher's scenes are quite charged and work well with his give-and-take with John. Raghubir Yadav deserves another mention for leaving an impression in a small role.

The film is well shot, with a very stylistic approach. The camera is used at close range to try to focus on the expressions of each character. It is not always great, considering the bad wig John has to pull off in the opening moments of the film.

Despite its flaws, Romeo Akbar Walter is a good attempt at creating an objective spy drama. Subtle, detailed and well-researched, the film has quite a lot going for it. It only lacks the tension and tautness that would have made this mission a success.

Darbaan review: Moving film based on Tagore’s tale of guilt

Director Bipin Nadkarni, who is known for his Marathi movie Uttarayan (2004), is firmly in control...

Naxalbari review: A decent attempt to expose the root cause of Maoism and its impact on people

The nine-episode series tries to do a balancing act by portraying both sides of the conflict with in...

Tindey review: An endearing film about encounters in the dating world

The film looks at the encounters of a middle-aged man as he navigates the world of dating...