Filmmaker Atanu Ghosh’s sensitive writing shows that not all past relationships that end in bitterness have to carry toxic undertones. It also gives hope in the midst of a lot of defeats and disillusionment regarding romantic relationships.

The lead characters in Atanu Ghosh’s Robibaar (2019) are two ordinary individuals. Their narrative is not unusual either. However, Ghosh breathes so much life into them that you will be intrigued to explore the layers of these two personalities throughout the plot.

These characters do not invite you to learn about them as they are already quite messed up in their respective lives. Yet, a Sunday brings them to a juncture where, given a chance, you would not turn down the voyeuristic pleasure of peeping into the lives of former lovers Asimabha (Prosenjit Chatterjee) and Sayani (Jaya Ahsan), who meet after 15 years of their separation.

Needless to say, the film is character-based and, hence, performance-orientated. Prosenjit and Jaya Ahsan’s chemistry and Ghosh’s dialogues not only establish that these two former lovers know each other well and for long, but they also help the audience to relate with the whirlwind of emotions that, perhaps, many couples go through but hardly realize. The two characters and Appu Prabhakar’s restless camerawork that connects their unpredictable thought processes and the audience’s inquisitiveness create an ambience that gradually absorbs the viewer's mind.

Asimabha and Sayani are two headstrong individuals and, perhaps, suffered the same fate that two egoistic individuals in a relationship often go through. Ghosh has not used a single moment of flashback to narrate how their relationship might have been 15 years ago; neither does he intend to inform the audience why they separated through any of Asimabha and Sayani’s dialogues.

Asimabha and Sayani are two complex characters, but it is their sensitive attributes that appeal to us. Asimabha is aware of his flaws and, perhaps, a little proud of them as they are inseparable from his calibre. He has confidence in his emotions and is unapologetic. Sayani, on the other hand, is bright and focused. She carefully intends to hide her emotions as a defensive mechanism, for her intellect and conscience stop her from giving in to the blatant manipulation of Asimabha.

However, there is an underlying romance that is evident from Asimabha’s honest surrender to his emotions for Sayani and the latter’s inability to completely ignore her former lover. A strong, independent, career-driven Sayani is clearly not the victim here, but she wants to see how far the man with ample mysterious and narcissistic attributes can go, with schemes and tactics hidden in his mind. The leisurely Sunday allows her the opportunity to repeatedly go back to a man with whom she claims to have no attachment, to see his impending fate.

At times, the audience might find Sayani a little too sadistic because of her continuous sarcastic comments. On the other hand, Asimabha might appear to be highly manipulative. But Ghosh makes sure to infuse them with a core of noble intentions which, perhaps, most humans want to retain but cannot on account of societal and psychological conditioning. Also, he saves both characters from having any problematic attribute, maintaining a fine line within the grey shades.

The climax of the film is unusual but relieving as well. Ghosh’s sensitive writing shows that not all past relationships that ended in bitterness have to carry toxic undertones. It also gives hope amidst a lot of defeats and disillusionment regarding romantic relationships.

The character of child actor Srijato Bandopadhyay is important here. When the two individuals seem to be directionless meeting after so many years, the child provides them with a connecting point and allows them to be a little calmer. However, the subtext of a stranger, who only comes to Asimabha’s house to fulfil a certain intention, has an unnecessary long narrative. Perhaps Ghosh wanted to raise anticipation or give a break to the narrative of Asimabha and Sayani, but the background of his personal life doesn’t have a proper closure.

Though the film is character-driven, it is not filled with dialogues. The poignant silences are much more important here and establish the continuous inner turmoil of both protagonists. The silences show that they are continuously contemplating each other’s moves before reacting. While Asimabha has some ulterior motive, Sayani mostly continues to change her mind every now and then, oscillating between escaping and facing reality.

Debajyoti Mishra’s music fills these pauses and brooding moments, with an essence of nostalgia and a feeling of longing that is intentionally subdued. The use of jazz instruments as well as the sitar at appropriate moments plays a crucial role in establishing the characters as well as setting a transient mood.

Prosenjit has shown commendable command over his character, which was not easy to portray. His eyes and body language speak a lot about the character that otherwise leaves a lot for the audience to speculate about. He is convincingly dramatic and natural as Asimabha. 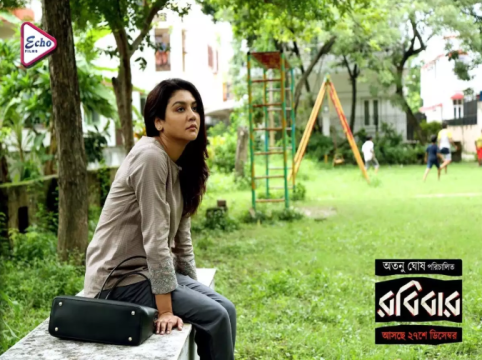 Jaya Ahsan also seems to have felt each nerve of her character, with much sensitivity. The way she remains consistent in the pauses as well as in the moments of expressing her subtle disgust and underlying compassion is worthy of praise.

It is a delight to watch the effortless Srijato Bandopadhyay on screen, vibrating with innocence and intelligence. Tathagata Banerjee, who plays a brief role; the newcomer who plays Sayani’s subordinate in her office, as well as the stranger are all seamless and synch with the mood of performances established by the two leads.

It is not easy to carry a full-length feature film solely on performances, but both Prosenjit and Jaya Ahsan have achieved that without becoming loud or melodramatic for even a moment. As the characters always follow each other’s moves before reacting, Prosenjit and Jaya Ahsan do the same as artistes, consistently balancing each other’s tone and position, making themselves irresistible to watch on screen.

It won’t matter if you don’t bother to know the story of these two ordinary individuals, but if you do, they will surely live with you for long and continue to reveal themselves, even after you have finished watching Robibaar.