Sudipta Chakraborty and Koneenica Banerjee have done an excellent job portraying contrasting characters in this short by Promita Bhowmik.

Promita Bhowmik's film Porichoy might be short in terms of running time, but it leaves a lasting impact.

Homemaker Anuradha (Koneenica Banerjee) lives a life of stability but is led to re-evaluate her existence after an old college friend, Sreya (Sudipta Chakraborty), comes visiting. The latter's thoughts on independence shine a light on unsavoury aspects of Anuradha's marital life and at the end of the film, both characters come to symbolize the choices they have made.

After Sreya admires the decor of her friend's house, praising her creativity, Anuradha admits that she has nothing else to do apart from sprucing up the walls that confine her. The conversation is just like any other between two women until Sreya drops a bomb, revealing that she is a sex worker.

Sreya's unapologetic acceptance of her professional life shakes up Anuradha's worldview. After she asks her friend why she couldn't have opted for a more respectable way of earning her livelihood, she grows defensive and begins to feel attacked when Sreya asks whether she is truly respected by her family and in the position to make independent choices.

Bhowmik has intentionally sketched Sreya’s character with an aim to challenge society, which refuses to respectfully recognize women’s autonomy. As Sreya goes on voicing her thoughts about making choices, women’s economic liberation and marital rape, she appears to be didactic. However, the purpose of the character is fulfilled because she eventually comes across as an affront to the patriarchal system to which many women woefully succumb. 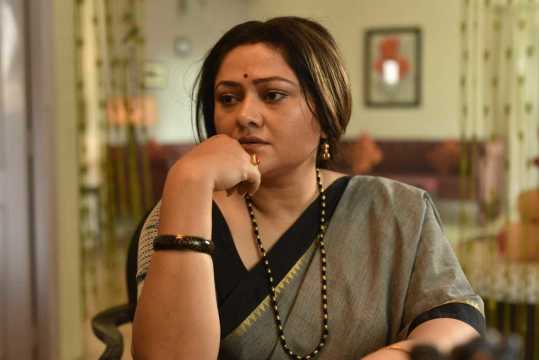 On the other hand, Anuradha represents the section of women who have been conditioned to not look into the mirror and refrain from raising questions regarding their own identity.

Sreya is as fierce and profound as Anuradha is submissive. There are multiple shots where Sreya looks directly into the camera and adores herself in the mirror. Banerjee, however, conveys volumes with her facial expressions, stealing looks and delivering contemplative monologues. Both actresses do justice to the contrasting characters with command and ease.

Raktim Mondal’s camera work brings out the shades of the two characters. By not featuring the friends in a single frame even once, Mondal conveys clearly that they are not on the same page.

Joel Mukherjee’s background score is dramatic in the dialogue-heavy first half and ambient in the second. Editor Shankha [Shankhajit Biswas] has cut the film suitably to allow its ideas to gradually take over the viewer's mind.

Bhowmik’s short is a cleverly conceptualized work, which reveals the maker's thoughts about the patriarchy but, at the same time, is also open to interpretation.

Porichoy was screened at the South Asian Short Film Festival at Nandan, Kolkata on 19 November.