Thematically, Ponmagal Vandhal (2020) is close to Vidya Balan’s Kahaani 2 (2016) but isn’t as effective in execution. It just manages to make its point, but with solid impact.

Ponmagal Vandhal (2020), directed by first-time filmmaker JJ Fredrick and produced by actor Suriya, isn’t your quintessential, feel-good Jyotika-starrer that talks about women's empowerment. It’s a dark film that throws the spotlight on the issue of child rape and holds a mirror up to our flawed legal system when it comes to the recklessness with which it treats rape cases and its victims.

Thematically, Ponmagal Vandhal is close to Vidya Balan’s Kahaani 2 (2016), but isn’t as effective as the latter when it comes to execution. It just manages to make its point but with solid impact.

The film is set in Ooty, Tamil Nadu, a town so beautiful, but with a dark past. The story centres on ‘Petition’ Pethuraj who reopens a case from 2004 that involved a serial killer ‘Psycho Jyothi’ who was convicted for the kidnapping and murder of five children and two youngsters. Pethuraj’s daughter Venba (played by Jyotika), a first-time lawyer, takes up the case to bring out the truth. In the process, some shocking secrets are revealed and challenges are thrown at Venba, who goes out of her way to dig out new information about the case and prove Jyothi wasn’t a serial killer. 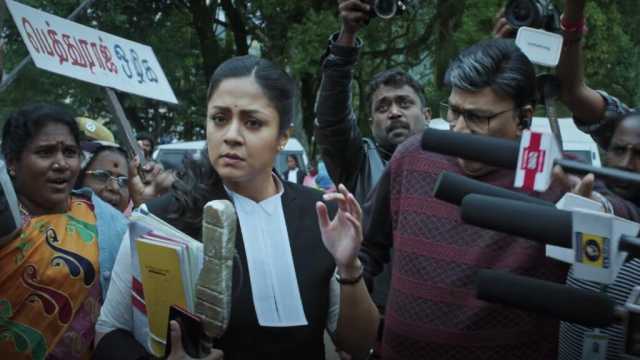 In an ideal Jyotika world, we would have seen her play a character that is independent, hard-working and empowered. In Ponmagal Vandhal, a slightly exaggerated but relevant social drama, what still makes her character refreshing is the fact that she doesn’t get to play a hero and the focus is more on the issue of child rape and our legal system. For a legal drama, I wish Ponmagal Vandhal was more intense and engaging.

The court scenes lack the high to keep us invested but, thankfully, the tragedy in the story makes it watchable. For a thriller about a cold-hearted serial killer who preyed on young girls, the film isn’t chilling enough. Nevertheless, what works in the film’s favour is the fact that it strikes a strong emotional chord with its back story.

Jyotika’s films, unlike most woman-centric Tamil films, aren’t run-of-the-mill and always serve a purpose. Ponmagal Vandhal, too, is made with a purpose and it’s a laudable attempt by first-time filmmaker JJ Fredrick, who gives us a legal drama that asks quite a few uncomfortable questions about the safety of girls.

One of the downsides of most films starring Jyotika is that they are mostly preachy, but that isn’t the case with Ponmagal Vandhal, and that’s a big relief. The court scenes get slightly dramatic, but the message never gets preachy. Jyotika, playing a lawyer for the first time, shines in what is definitely a bold role.

Set in the lockdown, each short explores themes such as rediscovering love, new beginnings, second...

Though Vijay Sethupathi plays an extended cameo, it is Aishwarya Rajesh who carries the film on her...

Great performers notwithstanding, the Amazon Prime series is a mishap that fails to be funny or...