Pondicherry review: This melancholic yet charming film is all heart

Sachin Kundalkar's film is a lighthearted drama about three lonely people who don't want to acknowledge that they are lonely.

Forget the Maldives, I want to visit Pondicherry at least once.

It is said that Farhan Akhtar's directorial debut Dil Chahta Hai (2001) gave a fresh lease of life to Goa tourism and sister Zoya Akhtar's Zindagi Na Milegi Dobara (2011) made Spain a popular destination for Indian travellers. I have no idea if a small Marathi film like Pondicherry can make a similar impact on the former French colony's tourism industry, but if it does, then director Sachin Kundalkar deserves some credit.

Pondicherry is a lighthearted drama about three lonely people who don't want to acknowledge their loneliness. Rohan (Vaibhav Tatwawadi) has landed with an ulterior motive at a home stay run by Nikita (Sai Tamhankar). Initially he comes across as a selfish hobo who lives only for himself.

Nikita is a single mother of a 10-year-old, Ishan (Tejas Kulkarni), and works as a tour guide for a hotel and manages a home stay. Because of his mother's busy schedule, Ishan has learnt to take care of himself as well as the house. In fact he even speaks like a grown-up.

The screenplay by Tejas Modak moves at a soothing pace without any need for melodrama. You feel every emotion each character is going through. At the same time, the film doesn't take us on a roller coaster of emotions. In the first five minutes, it sets a particular tone and follows it till the climax.

Throughout the film we are with our three protagonists, each trying to somehow hold on to their emotions. We spend every moment of the film with them, but still we sense a certain distance from them. It's as if all three have built such thick walls around them that, along with the other characters in the film, they don't want even the audience to get close. It is tricky to try to make you empathize with a character without letting you get absorbed in the character's pain, but Modak and Kundalkar manage to walk this thin line.

This is Modak's second collaboration with Kundalkar after Gulabjaam (2018) and once again they have given us an endearing film that explores human relationships, aspirations, lost opportunities, past mistakes and how to move on in life. 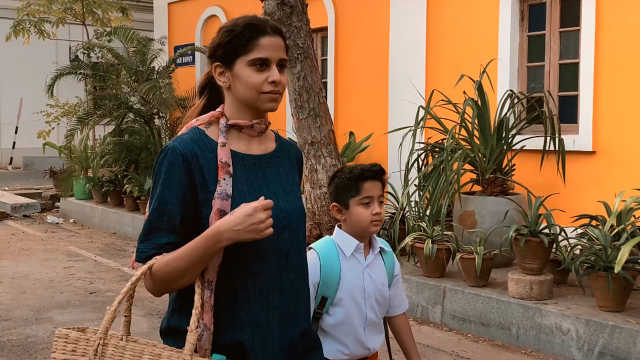 The screenplay lets one moment spill into the next. The film begins with Rohan's arrival in Pondicherry. We see the town through his eyes, but after some time the perspective switches to Nikita's.

Tamhankar delivers arguably the best performance of her career as a woman who is almost hanging by a slender thread of hope. With just a look, she conveys the emotional turmoil of Nikita — the silent sobs, her sleepless nights and the longing for someone she can share her pain with. Tatwawadi, on the other hand, exudes the lopsided charm of a man who seeks to hide his pain behind his Casanova image. The actor essays this selfish and uncomfortable role confidently.

Amruta Khanvilkar does a fine job as a woman who is finding it hard to come to terms with her mistake. She is trying to move on from the mistake, but her visit to Pondicherry reopens old wounds. At least for me, this is Khanvilkar's best performance till now. Child artiste Tejas Kulkarni is also believable.

Pondicherry, the town, is an equally important character in the film. Its calmness, the beautiful architecture, the serene beaches and empty roads provide a complete contrast to the emotional turmoil Nikita, Rohan and Manasi are going through.

Pondicherry has been one of the more talked about films in the past three years as the first Marathi feature to be shot entirely on a smartphone. And never once does the work of director of photography Milind Jog suggest that the film has been shot on a mobile phone. In fact, had they not announced it, few would have been able to guess it.

Pondicherry is not without its flaws. The last act just doesn't gel with the melancholic tone the rest of the film has set. Imagine you are writing an essay on a favourite topic and enjoying the process so much that you fail to notice you are going over the word limit and also running out of time; now you simply need to wrap it up in a paragraph or two. What do you do? You close with whatever pops in your head first, don't you? The last act felt like that.

After setting up such a complex narrative, it appears the makers did not know how to conclude it well. The way those last few minutes play out, closing one plot point after another, feels too pat.

Don't get me wrong, the climax is charming, even fulfilling,to an extent. But the writer and director's urge to give a proper conclusion feels too filmi. Till then you feel like a fly on the wall observing real people and what they are going through in their lives. But the climax and 'proper' ending jerk you back to reality and remind you that this is only a movie.

Maybe if the filmmaker had chosen to go with an open ending, or at least curbed the desire to come up with a solution to every problem, the film would have made more of an emotional impact.

Despite this flaw, I loved this charming film and would heartily recommend it to you.

Pondicherry is being released in theatres today.