Photograph review: This tender romance of loneliness stays with you despite the flaws

Ritesh Batra's sensitive story finds Sanya Malhotra in scintillating form, but lacks the refined edge to turn this into another The Lunchbox.

'Tumne mujhe dekha/hokar meherbaan' is a refrain that echoes through Ritesh Batra's delicate story of two lost individuals finding companionship. Batra has tackled the theme before in The Lunchbox (2013). Sadly, Photograph becomes stylistic for the purpose of style rather than its narrative. Sanya Malhotra's scintillating and controlled vulnerability brings to fore the potential of the actress, despite the jagged flow of the Photograph narrative.

The story is one of friendship and companionship formed between two most unlikely people in a class and caste divided city of Mumbai. Rafiq (Nawazuddin Siddiqui) is a photographer at the Gateway of India, while Miloni (Sanya Malhotra) is a Chartered Accountancy student preparing for her exams.

Under pressure from his grandmother (Farrukh Jafar) to get married, Rafiq passes on a photograph of Miloni that he took at work as his girlfriend, Noorie. Thrilled, the grandmother lands up in Mumbai, forcing Rafiq to reach out to Miloni and convince her to pretend to be his girlfriend for a while. Looking for a way out of her own cloistered family, Miloni agrees. The two build a sensitive, longing friendship around the lies they tell.

The film, like The Lunchbox, is a portrayal of unspoken, quiet relationships that people foster in the crowded city. It is seeped with the nostalgia of kulfis and Campa Cola (which seems odd in a world of smartphone selfies). Slow, but evocative, Batra builds a city within a city, where technology finds very limited presence. It is built around conversations of lonely ghosts that haunt lonelier bachelor shanties, and old Hindi songs that float around as thematic cues for their emotions. 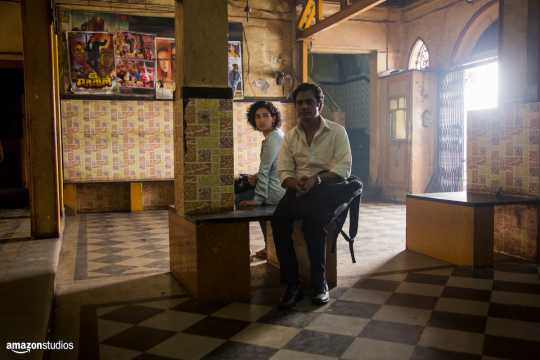 What Photograph lacks is the natural, easy flow of the story that made The Lunchbox endearing. The odd cuts, and non-linear narrative makes for an unnecessary stylistic device. Despite the moments of flourish, and some magical conversations, the film has a staccato flow that affects viewing. The blindness of the grandmother to the differences in class between Miloni and Rafiq, as well as the confidence with which Miloni agrees to Rafiq's deal, despite the very familiar threat of sexual harassment hanging these days does not sit well.

Sanya Malhotra delivers a fantastic performance as the controlled and repressed Miloni. The actress has grown with every role, and playing a young girl with no control over her decisions, she embodies a vulnerability and delicateness that is endearing. With Rafiq, she finds the sense of freedom and friendship that her family or others fail to provide her. Malhotra never lets the audience get a complete view of Miloni, while every once in a while letting you peek behind the stoic face. The playfulness with which she concocts a story of her first meeting with Rafiq, offers a glimpse into her personality suppressed by her family.

In contrary, Nawazuddin Siddiqui finds himself trapped in an under-written character. The actor is hampered by a poor flow of dialogues. While they bring authenticity to conversation, they are unconvincing on the screen.

The film also has a score of characters who breeze through. Jim Sarbh, Sachin Khedekar bring some element of drama to the screen. Geetanjali Kulkarni, impeccable as always, brings an added dimension of the class divide within Miloni's house. She also becomes the only gateway Miloni has to a relationship outside the hierarchy of her household. Vijay Raaz makes a hysterical appearance as well, though without adding anything to the story.

Batra's film is touching and evocative. Like the line from the Teesri Manzil song, it captures the loneliness and desperate need for kindness in a cruel city that, in Rafiq's words, keeps 'Going on and on'. Yet, it is hard to believe that a little deft handling of the tale might have resulted in a more effective film.