The romantic comedy, written and directed by Mudassar Aziz, is a showcase for male lead Kartik Aaryan.

Remakes and reboots seem to be the flavour of the season both in Hollywood and in Indian cinema. Mudassar Aziz takes on the 1978 marital drama and love triangle of the same name starring Sanjeev Kumar, Vidya Sinha and Ranjeeta and gives it a much-needed modernization.

Moving the setting from Mumbai to Kanpur in Uttar Pradesh, Aziz's feature introduces us to the Tyagis — the honest, upstanding Abhinav 'Chintu' Tyagi (Kartik Aaryan) and his spirited wife Vedika Tripathi (Bhumi Pednekar). Theirs is an arranged marriage, but over three years the couple has settled into a loving but routine marriage. 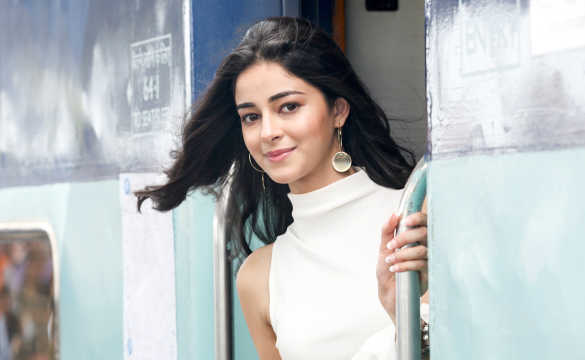 Enter Ananya Panday as Tapasya Singh, a beautiful young woman from Delhi who arrives in Chintu's office seeking help. Tyagi is a rising engineer in the Public Works Department (PWD) and Tapasya needs helps acquiring a plot of land for her workshop. Swayed by her manner and looks, Chintu agrees to be there for her.

With Aaryan playing the naive but beleagured husband, it is but expected that the actor will rant about his character's sorry state. However, the rant is not convincing as Chintu Tyagi pretty much has everything going for him; he lies to Tapasya that Vedika is having an affair, simply to get some excitement and notice in his life.

Though Chintu is too young for a mid-life crisis, he shows similar symptoms and, before his marriage to Vedika, looks to a caged parrot, as if he feels the same.

The portions where Chintu juggles the two women in his life are entertaining, especially as Aziz adds lively characters to the mix. Aparshakti Khurana as Chintu's best friend Fahim Rizvi is hilarious and tries to be both counsellor and buddy. Like his talented and more famous sibling Ayushmann, Aparshakti is a natural when it comes to comedy. The supporting actor makes the most of the part written for him. 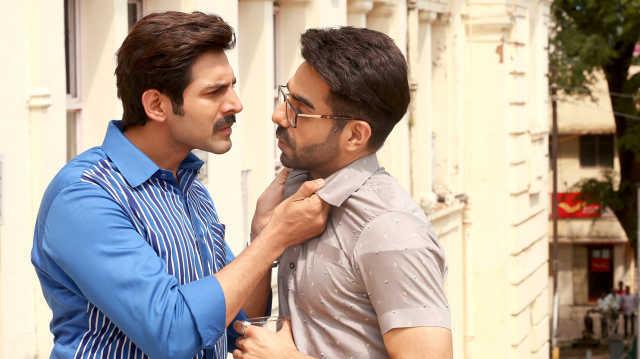 Panday's Tapasya is the weakest character in the comedy. Thankfully, in this version, the 'other woman' is not the stereotypical secretary but a young businesswoman. But unlike the Tyagis, she feels a bit undeveloped as a character and doesn't add to the situational comedy of the screenplay.

Aaryan and Pednekar have good chemistry as Chintu and Vedika. As the wife, Pednekar shows that Vedika is not a doormat and is proactive in fighting for her future. Whereas the original showed the couple mostly reconciling for the sake of their young son. 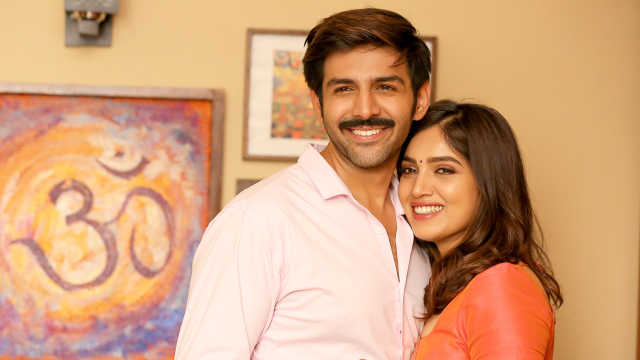 Like in the 1978 film, infidelity is initially played for laughs here, but the mood turns serious when the institution of marriage is threatened. But while the older film excused infidelity as men will be men, this version shows Aaryan more remorseful. His character is taught a proper lesson by the end.

Towards the climax, Aziz adds chaos and madness as all the characters chase Vedika, somewhat like in his 2016 surprise hit, Happy Bhag Jayegi.

This remake is another winner for Kartik Aaryan who will likely gain new fans with the comedy. The actor scores highly in the comedy scenes and his bromance with Khurana is a hoot.

Using the now predictable formula of setting the story in a smaller city and not bogging the film down with dance numbers and songs, Aziz focuses the love triangle into a comedy of misunderstandings and errors. And it works. His witty dialogues, especially for Fahim Rizvi, work as the situation becomes wackier with the narrative's progress.

While the 2019 version brings the subject and its characters firmly into the new millennium, it is still rooted in the old-fashioned ideals of men, women and their respective places in society. At times, the film even resorts to the typical husband-wife humour that makes the rounds most mornings on WhatsApp groups.

Pati Patni Aur Woh is a lighter take on extramarital affairs and infidelity. Don't go in expecting heavy-duty drama about marriage and relationships; this reboot is both entertaining and colourful. Nothing more, nothing less.

Duranga review: Remake of the Korean crime drama is an engaging affair

Created by Goldie Behl and directed by Pradeep Sarkar and Aijaz Khan, the show features a fine act...