Parcel is technically brilliant and the performances are outstanding, but the film might have been far more appealing if it had been shortened and certain episodes had been omitted.

It is difficult to analyse Indrasis Acharya’s recent film Parcel as an original work for one who has watched, and been deeply moved by, Michael Haneke’s psychological thriller Cache (2005). This reviewer is not certain whether the director has acknowledged any inspiration from the French film; however, Parcel appears to be a weaker Bengali remake of a film that has been listed among the 100 greatest films of the 21st century by the BBC.

Cache addresses the deeply political issue of colonialism and the demonization of a minority community within the structure of a psychological thriller in which certain symbols and a pattern subtly direct the audience towards the hidden message.

The title, which translates to Hidden in English, indicates the unearthing of some buried guilt of one of the protagonists, which also indirectly affects other characters related to him. It is amazing how Haneke has conveyed both an apparent and an underlying meaning of the narrative in the garb of real issues of psychological trauma that pass down the generations.

Parcel has the basic plot structure of Cache, in which one half of a couple begins to receive parcels from a stranger. The anonymity of the sender triggers the fear of being blackmailed by someone from the past and raises a sense of guilt in the receiver.

Nandini (Rituparna Sengupta), a doctor who has left her job, begins to receive photos from her past as well as from the present, which indicates that she is under continuous surveillance. Soon, she senses that she is being blackmailed and hence begins to try to trace the potential threats.

Acharya twists the narrative here by bringing in the hypocrisy in an apparently successful marital relationship. Nandini’s husband Souvik (Saswata Chatterjee), also a doctor, is having an extramarital affair. But he lives a nonchalant, guilt-free life, while his wife, clearly loyal to him, starts turning into a psychological patient with the digging up of a past that, perhaps, does not harm anybody in the present. She becomes insecure and fears that her family life will be damaged.

Unlike in Cache, however, Nandini has too many guilts to process. Acharya touches upon four such cases though he does not care to clearly explain three of them, involving a character named Arundhati (Damini Basu) and the character played by Anindya Chatterjee, unlike in Cache, and lets them remain mysteries till the end. Of all the past incidents that haunt and disturb her, the case in the nursing home seems more legitimate as it establishes a connection with her rising sense of insecurity since she was forced to quit her profession.

While Acharya shows the insensitive side of the doctor couple with the episode of Nandini’s relative’s death without proper treatment, he also includes the recent trend of mob attacks on doctors and hospitals. However, in the plot there are only incidents of random mob attacks that do not trace the politics behind the organized mentality of hooliganism. It only paints a black-and-white picture of the incidents that demonizes the mobs, who, according to the director, attack doctors for their failure to save patients. For instance, Souvik repeatedly says doctors are losing their values. However, he himself plays it safe when it comes to attempting to save Nandini’s relative.

Acharya follows a pattern of telling stories in which the audience begins to live with the characters and becomes part of their daily life. For an audience that may not have watched Cache, Parcel may retain its thrill till the end, but otherwise, in the second half, Nandini’s hunt for the supposed blackmailer seems repetitive and exhausting after a certain incident that also has close similarities with Haneke’s film.

On the other hand, Acharya retains the metaphor of Parcel till the end with a different approach. While he establishes that Nandini’s profession has a lot to do with her rising stress with the arrival of the parcel and the subsequent events, and that it may get resolved with the prospect of a new professional journey, he touches upon the climax with the advent of a novel guilt trip in Souvik’s life. Acharya establishes that anybody can suffer such guilt trips and fail to move on if they cannot process them at the right time.

Joy Sarkar’s music and background score are among the striking aspects of the film, and set a calming mood. The audience can anticipate from the beginning that Parcel will slowly intrude into the lives of the characters and bare them all. The violin chorus of the credits scene in the beginning comes back repeatedly in the film to stress the regularity of the incidents and create an illusion of real-time events.

Santanu Dey has made a lot of effort to accommodate the characters in their surroundings without making the presence of the camera apparent. The rooms of the couple’s house, the music class and Souvik’s car essentially turn into characters in the film. It is interesting how both the cinematographer and the director have chosen not to show the face of the handicapped husband of Arundhati, to stress on his apparently useless existence. The focus on Nandini’s face during her interactions with Arundhati, Anindya and Ambarish Bhattacharya’s character hints at her one-sided assumptions. Malay Laha’s editing retains the consistent flow of the narrative.

Rituparna Sengupta carries the film on her shoulders, gradually creating her state of depression through perpetual tension, unreasonable outbursts and a haggard look. Her expressions in close-up are outstanding. 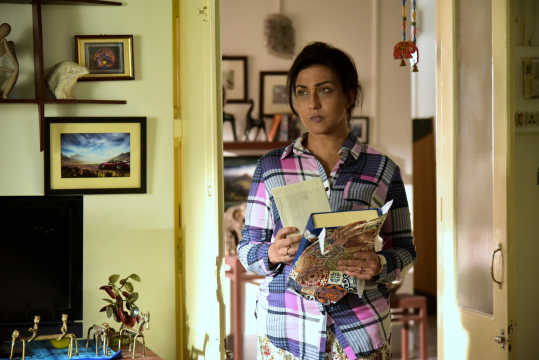 Saswata Chatterjee’s performance is even better as he highlights Souvik's hypocritical traits with a seamless performance. Damini Basu delivers a strong performance suggesting repressed anger. Ambarish Bhattacharya is decent in his brief appearance. However, the character of Shaju, daughter of Nandini and Souvik, appears too animated and so does the child artiste's dialogue delivery.

Parcel would have been much more appealing if it had been shortened and certain episodes in the second half had been omitted. While the journey of the characters leaves an imprint on the mind, the issues they deal with are sometimes left unresolved, affecting the cinematic experience.