Pagglait review: Sanya Malhotra is a young widow in search of an identity in this fine drama

Written and directed by Umesh Bist, the Netflix film follows a grieving family coping with the death of the older son.

The peace of the Shanti Kunj household has been shattered by the death of twenty-something Astik Giri. His younger brother Alok (Chetan Sharma) shaves his head, while relatives and well-wishers descend on their home to offer condolences.

Like the recently released Ram Prasad Ki Tehrvi (2021), directed by Seema Pahwa, and also set in Lucknow, Umesh Bist’s Pagglait (2021) has moments of drama and humour that only family members sequestered in a house during a tragedy can conjure up. Astik’s widow, Sandhya (Sanya Malhotra) remains holed up in her room, as she doesn’t know what to do.

She tells her friend Nazia (Shruti Sharma), who has arrived for moral support, that she cried more for her cat who died when she was a child. But Sandhya’s emotions are understandable to the audience. Married for only five months, she barely had a chance to know her aloof husband; she doesn’t even know his favourite colour. And she soon discovers he died leaving a few secrets behind as well.

One comes in the form of Sayani Gupta’s Akanksha Roy, who ends up being an odd friend and inspiration to Sandhya. Another is the Rs50 lakh life insurance policy, of which Sandhya is the sole beneficiary. The news causes a big upheaval in the Giri household as they digest this information. 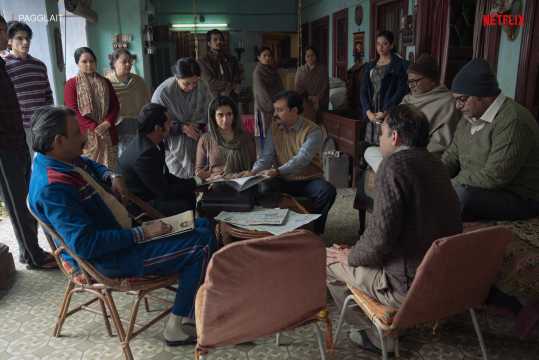 Then, of course, there is the matter of what to do with Sandhya. At first, Sandhya’s mother (Natasha Rastogi) insists her daughter should stay behind at her in-laws, but later, after news of the insurance policy is announced, she thinks Sandhya should come back home. Another relative convinces her son to propose to Sandhya, even as the family elder Papu Tayaji (Raghuvir Yadav) believes the money should stay within the family.

Meanwhile, the person at the centre of it all, Sandhya, has her own conflicting emotions. At first, her grief is stunted, and when she finally sheds tears, it’s a revelatory moment. Malhotra's character goes through the stages of grief, with quiet understanding, and comes out the other end, in a better place.

Bist surrounds Sandhya with a strong supporting cast. Again like Ramprasad Ki Tehrvi, there is a sanctimonious elder, Papu Tayaji, who asks others to follow traditions, while breaking them himself in private. He openly disapproves of Nazia staying in the house and arranges to have her food and drink segregated. 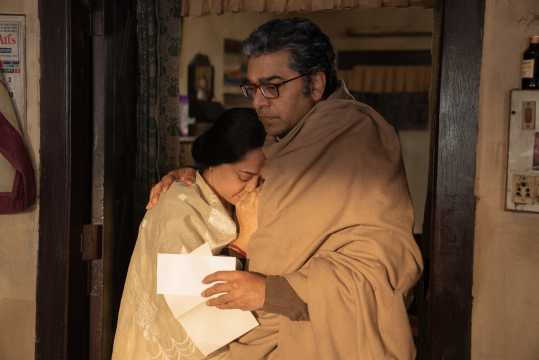 Ashutosh Rana and Sheeba Chadha, as Shivendra and Usha Giri, the grieving parents, bring the emotion home in this drama. They are weighed down by Astik’s death as various relatives give them advice on their finances and future, and they struggle to move on. Bist gives these distinct family members their own quirks and characteristics.

The filmmaker also gives the film some lovely touches of humour. A family friend Parchun (Aasif Khan) decides to take Nazia out to eat some mutton biryani for dinner, only to be dismayed to find out she is vegetarian. “Har Sachin, Tendulkar nahin hota [Every Sachin is not a Tendulkar],” she wryly comments. Meanwhile, in the early days of the tehrvi, the whole household doesn’t know where to look when the doorbell belts out the tune of ‘Ooh La La’ from The Dirty Picture (2011).

The film’s soundtrack is melodious, with singer Arijit Singh making his debut as composer. However, as it is a house in mourning, no one thankfully bursts into song, as the tracks play in the background as the narrative moves forward.

Scenes of Sandhya eating gol-gappas on the street are intercut with the Giri men pouring Astik’s ashes in the Ganges river. The young widow has thrown tradition out the window as she keeps craving some flavour in food and something more from life.

Bist has a firm hold of the proceedings and guides Sandhya as she searches for her identity, which is refreshing to watch. “Jab ladki log ko akal aati hai, toh sab unhe pagglait hi kehte hai [When women find their smarts, everyone says they’ve gone crazy],” Sandhya exclaims. Pagglait is a lovely family drama that is worth your time.