Pagalpanti review: At least Anees Bazmee was honest about the brainlessness of this comedy

Anees Bazmee's film has no semblance of a plot, and is filled with jokes that fall flat, hammed up acting, and an unnecessarily lengthy script.

Whether Pagalpanti (2019) is termed good or bad, it remains a fact that Anees Bazmee was honest in the promotions of the film. From the initial poster launch, the makers have been betting their horses on the 'no brains' comedy tagline of the film. Whether the horse wins or loses, at least they were honest with their caveat emptor. For the audience that does brave through Bazmee's illogical film, an experience of sheer panic at having spent money on the tickets is likely.

Raaj Kishore (John Abraham) is an accursed and unlucky poor sod trying to make his way through life. With Junky (Arshad Warsi) and Chandu (Pulkit Samrat), he finds himself to be as effective on any bundle of money as an order of demonetization. Having run down every business, including his own girlfriend, Sanjana (Ileana D'Cruz), he is on the run.

Their curse takes him to the house of Raja Saheb (Saurabh Shukla) and Wi-Fi Bhai (Anil Kapoor), and one calamity after another follows. This includes a very Gujarati Niraj Modi (Inaamulhaq), and two dons named Tulli and Bulli, and a climax that includes scenes stolen directly from Andaz Apna Apna (1994).

In short, the film is anything that can be stitched together by sophomores on a drunken binge. The women have little to do except look pretty. If Kirti Kharbanda's separation from Anand Pandit's production house means less of movies where she plays a dumb bimbo, it can only be good for her. As for why John Abraham, Arshad Warsi, Anil Kapoor and Saurabh Shukla signed on for this travesty is a mystery deeper than any the film concocts. 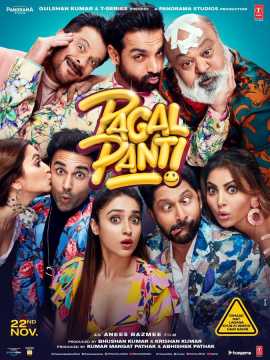 The comedy in the film is slapstick, punned, and laid over so thick that it is not worth the effort to laugh. With a heavy dose of hamming (Anil Kapoor, John Abraham, and Pulkit Samrat) overlaying it, there are few situations that are truly funny. By the time the climax arrives, you simply laugh at how much money is spent at all this while there are students fighting for their education. As Albert Camus said, the world is absurd.

As mad as the film's start is, there is some semblance of weak laughs in the first half. Every now and then, the hamming does result in laughter. Arshad Warsi still retains his comic timing and makes the most of it. But the film soon loses focus with the arrival of the Niraj Modi character. With that, it takes a patriotic twist (complete with a piano rendition of the 1986 film Karma's title song) and deviates into mindlessness. Although there is a lingering suspicion if that was the eventual objective.

While it is commercially viable these days, the forced patriotism skewed into the film towards the end feels cringeworthy. Bazmee and his team of writers do need to take the blame for this one. While the writers might have thought the one-liners were great, they just don't land often enough. With a 165-minutes run time, that is deadly for a comedy film. Especially when the climax feels like a sequence that will never end.

In the end, the only credit that can be given to the makers of the film is that of honesty. This film requires a dumbing down of the senses to the extent that we believe demonetisation was successful at preventing black money, and believe that climate change is a hoax. If you can do that, Anees Bazmee's film is for you.

Laghushanka review: A family tries to hide an embarrassing secret before a wedding

The directorial debut of writer Nikhil Mehrotra is a delightful take on secrets and arranged...

Cinestaan Curates: MAD is a captivating film that fuses craft with sensitivity

Vinod Rawat gives us an unconventional film that exhibits the ways in which the mother and out...