The stories have been narrated from the perspective of the women who have taken their own decisions to lead their lives — complicated and not so perfect.

Debarati Gupta’s Onek Diner Pore is a film that deals with the façade that women choose to live with under immense societal pressure. In the film, revolving around four female protagonists, the characters themselves turn into stories. They are flawed and they own their vulnerabilities like a boss. The vulnerabilities bring a breath of fresh air amidst their frustrations, jealousy and insecurities.

Gupta’s efforts need to be lauded for gifting these flawed urbane female protagonists who are real and exist within us. Also, in the process of depicting their stories, Gupta has not resorted to turn men into villains. The stories have been narrated from the perspective of the women who have taken their own decisions to lead their lives — complicated and not so perfect. These women have their own ideals and are aware of their limitations. However, in order to meet their inner demons they were perhaps waiting for a reunion that eventually turns their life upside down.

Swagata (Swastika Mukherjee), Kuhu (Palomi Ghosh), Deboleena (Sudipta Chakraborty) and Sayantini (Rupanjana Maitra) are from the same school. A reunion is organised after many years, however, out of 15 students only four make to it. Swagata is a devoted housewife. A topper in her school days and a former IIT graduate, Swagata now makes sure to always prove that she is leading an ideal life, taking care of her husband and bringing up her child. She is so used to that pretence that she has started to believe it to be true. Desperate to hold her world together, she keeps her cocoon small and doesn’t prefer too much liberation. Feminism is just a gimmick for her.

Sayantini earned fame as a model early in her school days. However, as it often happens in the glamour world, she stumbled upon the success. Now she is busy proving to everyone that she is a celebrity and desperately looking for opportunities wherever she can. 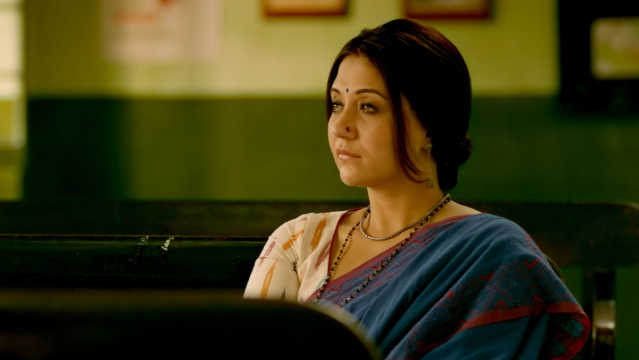 Deboleena pretends to be enjoying her life with weekend parties and an apparently carefree life. However, she cannot hold on to her mask for long. She is bitter about life and doesn’t miss a single opportunity to take a dig at her friends’ life.

Kuhu, a former rival of Swagata in her school and currently a professor at the Stanford University, appears to be the most balanced and sorted out of the lot, until the climax, where she too cannot muster her inner demons and inflicts all her anger and ego on one of her classmates.

Four of them meet and greet each other cordially as friends do after a long period of absence of communication. They have their share of fun, but they never appear to be each other’s best friends. Each has something ill to speak of another, on the face. However, their insecurities begin to lay bare as they start playing one of their favourite games from school days — truth or dare.

Unknown truths come out and shock some, while the others, who have already been aware of the dark stories, extend their hands of compassion and compare the situation with their own. It becomes a roller-coaster ride for them as they cannot decide when to accuse and judge the other and when they need to support. Sometimes, they find it hard to place themselves in the spectrum of foes and friends.

The film brings out the ugly reality of an unhappy marital life and of one that only demands one-sided compromise. The dark sides of obsessions regarding a glamorous life and the threats and challenges of raising a child as a single mother are also discussed here. Gupta has also shown how the seeds of patriarchy are deeply sown since school days, often through the active support of women. 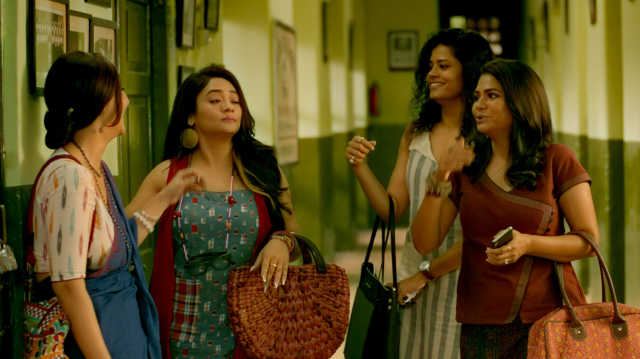 Director Debarati Gupta deserves credit for conceiving the entire screenplay of the reunion in a way that appears to be a series of incidents that take place in real time in a gathering of a group of girls. Apart from meeting with their realities, the girls unapologetically gossip, discuss their sexual life and adultery. In the process, they hurt each other as well, but at the end of the day they prove to be each other’s confidantes and supporters. They know that their journey might turn more complicated. They arrive at an equation in which they might not able to be cordial with each other, but they promise to silently protect their secrets for their own sake, not turning into each other’s soulmates.

The film doesn’t have much dramatic intensity in terms of action as it is entirely dialogue-based. Gupta’s excellence lies in writing the dialogues in an extremely natural flow, straight from the chit-chat of four vulnerable souls. She retains honesty throughout the script. Pratik Mondal does a decent job in keeping up the temperament throughout his camerawork, not experimenting much.

Sudipta Chakraborty and Swastika Mukherjee both give hints to the inner corners of their minds from the beginning, with their nuanced performances. While Swastika’s contentment appears forced, Sudipta's bitterness and jealousy cannot escape her eyes and make their presence in her restrained expression of delight in others’ happiness.

Ghosh is extremely natural in most of the sequences, but fails to infuse required intensity in the moments of heightened emotions.

Raja Narayan Deb’s music is minimalistic and is in sync with the sequences. 'Ke Jabi Pare' by Iman Chakraborty lends a breath of fresh air to several situations on the verge of turning tense.

Onek Diner Pore is a must-watch, especially for women. The accounts in it are easy to relate to and real. The story peels off the characters by layers and also attacks several stigmas in layers as well. At the same time, Onek Diner Pore assures that people will always be judgemental and it is okay to be flawed and important to embrace one’s insecurities.

Onek Diner Pore is available on the Zee5 digital platform.