Director Ashok Kumar seems to have been unable to pick the right choice in the toss up between making a realistic film to inspire audiences and a film with exaggerated sequences to entertain.

Debutant B Ashok Kumar's Neruppuda is a typical action thriller with a generous dose of suspense too.

Guru (Vikram Prabhu) and his four friends, all of whom hail from a middle class neighbourhood, have only one dream — to become firefighters. All five have nurtured this dream from childhood. Although they haven't turned firemen yet, they own a fire fighting vehicle and indulge in rescue and firefighting missions on their own (some costly hobby this!). They are now in that stage of their lives where they are just one step away from realising their dream of turning real firefighters. All they have to do is clear a written examination to enter the department and naturally, the youngsters are waiting for the day of the examination with eagerness.

While they wait for the day of the examination, misfortune befalls one of the friends. The friend, identified as Dhana, has trouble coming his way in the form of a drunk gangster called Sada, who picks a fight with him just to show off to his drinking partner. In the process, Sada physically assaults Dhana, who, initially shows great restraint, but eventually is forced to hit back in self-defence. Unfortunately, Sada's head rams against a stone and he dies on the spot.

Dhana and his friends get to know that Sada is the right hand man of a notorious gangster called Pulianthope Ravi. Ravi is outraged that his man has been killed and vows to kill the murderers of his friend and fellow gangster.

This unusual and dangerous situation that they find themselves in forces the friends to miss the fire services exam. The friends now have to take on Ravi on the one hand to escape his wrath and also have to figure a way out to enter the fire services.

In between, Guru falls in love with Vasumathi (Nikki Galrani) a medical student who is also the daughter of the zonal officer in the fire department.

Initially, Pulianthope Ravi does not know who the killer of his friend is. Meanwhile, Guru and his other three friends, choose to share the blame for Sada's death along with Dhana. When Ravi thinks that Guru is the reason his friend is dead, there is a confrontation between the two and Ravi swears that he will kill all those close to Guru to extract revenge. 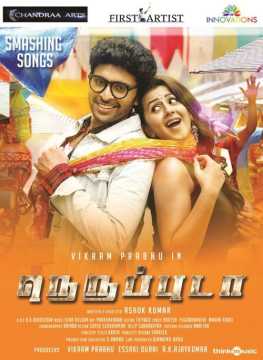 Naturally, Guru is worried and sets his mind on the task of driving sense into Ravi's head. Just when Guru thinks he has made Ravi see reason, his father gets killed. An infuriated Guru sets out to get Ravi. However, when he does find Ravi, he is shocked for the man and his gangsters are already dead. If Pulianthope Ravi and his gangsters have all been killed, who killed his father? A new problem emerges for Guru and his friends...

Director Ashok Kumar seems to have had a problem in making up his mind on what kind of movie he wanted to make. He seems to have been unable to pick the right choice in the toss up between making a realistic film to inspire audiences and a film with exaggerated sequences to entertain. As a result, he seems to have made a film with both. The net result is he leaves his viewers immensely dissatisfied.

Neruppuda's story is so exaggerated and far fetched from reality that it fails to inspire. At the same time, it is too idealistic for it to be entertaining.

The film has its strengths though and they are not small ones by any standards.

The first of these is some scintillating music from Sean Roldan. Almost all the songs of the film rock but 'Aalangiliye' in particular steals your heart.

The next is RD Rajasekar's camerawork, which leaves you spellbound on several occasions through the film. The aerial shots of the colony in particular are fantastic. The same can be said of the manner in which a couple of songs have been shot.

Three actors stand out in this film for their performances. The first of these is actress Sangita, who makes an appearance for less than 10 minutes but who actually shakes you out of your drowsiness with her scintillatingly fierce and captivating performance. The forceful performance is so hard hitting that it pushes all other good performances to the background.

Vikram Prabhu seems to have improved vastly with his acting in this film. The man looks the part and has no problems delivering a balanced and measured performance.

Vasumathi's role is a cakewalk for Galrani, who comes across as a cute girlfriend and a loving daughter.

Although all of this work in favour of the film, the fact that director Ashok Kumar hasn't capitalised on the film's strengths have a telling effect on the final outcome.