Nerkonda Paarvai is easily the most important film in Ajith’s career. Given its strong message about women’s liberation and its reiteration of the importance of consent, it is a big deal when backed by a star of Ajith’s stature.

It has been a while since Ajith starred in a wholesomely satisfying film and Nerkonda Paarvai, the official Tamil remake of the Taapsee Pannu-starrer Pink (2016), could not have come at a better time.

Ajith, who has been playing it safe with tried-and-tested films over the past few years, literally unleashes himself to headline a powerful, relevant film that questions our patriarchal society and how it views independent women. He competently shoulders the film all the way with strong backing from Shraddha Srinath, who reprises Pannu’s role, and is equally terrific as her counterpart in bringing out the helplessness of her character.

The film follows three young women — Meera, Famita and Andrea — whose fun night at a music festival turns into a nightmare when one of them (Meera) escapes a molestation attempt by Adhik, son of a very influential politician.

Meera attacks Adhik with a bottle and manages to escape, but the feat starts to haunt her. The women are constantly threatened by Adhik’s friends and with no respite in sight; they decide to take the matter to court. 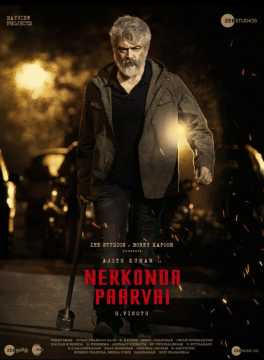 Nerkonda Paarvai, as a remake, does not tamper with the soul of the original much but for minor changes made for commercial reasons. Given Ajith’s stardom, the film could have taken a more commercial route to pander to his fan base, but it’s amazing it stays mostly faithful and that is heartening. Though the film features an action sequence (which is well choreographed) and a very odd backstory featuring Vidya Balan, it still manages to impress the viewer and how, especially when it comes to the court scenes in the second half.

Nerkonda Paarvai is easily the most important film in Ajith’s career. Given its strong message about women’s liberation and its reiteration of the importance of consent, it is a big deal when it is backed by a star of Ajith’s stature.

Ajith plays Bharath Subramaniam, a famed lawyer who is now fighting his inner demons and mourning the loss of his wife. He is dealing with depression and suffering from bipolar disorder. When he gets an opportunity to represent the young women as their lawyer, he sees it as a way to get over his past. Ajith could not have played his part better and he is majestic in the court scenes.

Shraddha deserves more praise for being open to accept the role. Not only does it take guts to play such a character, but also the conviction to pull it off convincingly. Shraddha really makes us buy her helplessness with a mature performance that is mostly believable and never too dramatic. Abhirami and Andrea are equally good in their respective parts.