Navarasa review: Despite some promise, this Netflix anthology leaves one feeling exhausted

The idea of exploring nine rasas, or emotions, through an anthology makes Navarasa one of the more innovative attempts in recent Tamil cinema.

The idea of exploring nine rasas in the anthology format makes Navarasa one of the more innovative attempts in Tamil cinema in recent years. When you start to dissect each of the short films in the anthology, however, you realize that not all work. A few stand out as they succeed in translating the chosen rasa, or emotion, into the story, the rest barely make an impact, let alone entertain. Also, it is exhausting to sit through more than five hours of the anthology as you don’t get the time to savour each of the worlds the constituent shorts explore.

One of the more anticipated shorts, Guitar Kambi Mela Nindru, stars Suriya. Directed by Gautham Vasudev Menon, it explores the theme of love. But it leaves you drained with its clichéd romantic set-up. The plot centres on a musician and how he is inspired to get better at his work after meeting a young woman. Suriya and Prayaga play the leads, but much as they strive to bring out the chemistry, everything feels so artificial. Though romance has been his sweet spot, Gautham Menon is getting repetitive with his writing, as if stuck in a loop, telling the same story repeatedly.

Karthick Naren’s short, titled Project Agni, explores the theme of wonder. It is among the best in the anthology and certainly qualifies as Karthick’s best work till date. In just 30 minutes, the filmmaker comes up with a mind-bending science-fiction thriller that packs a punch. From talking about human civilization to alien life and subconscious reality, the short leaves you awestruck. Arvind Swami and Prasanna keep you pinned with their performances till the last moment.

Vasanth S Sai’s Payasam is set against the milieu of a brahmin wedding. Based on the theme of disgust, it stars veteran Delhi Ganesh while Rohini and Aditi Balan are seen in supporting roles. The short talks about how one man’s jealousy pushes him to do something that leaves his own daughter feeling disgusted. It takes a predictable route to make its point.

Arvind Swami makes a solid directorial debut with Roudhram, which explores anger. The writing and filmmaking make it the best short in the anthology. It is centred on the investigation of a young boy who has knocked a man down with a hammer in a fit of rage. As the police probe the reason for his action, the film cuts back to narrate what pushed him over the edge. The big surprise comes in the form of a final twist involving the boy’s sister.

Rathindran Prasad’s short, Inmai, about fear brings Siddharth and Parvathy Thiruvothu together for an interesting take on the concept of Islamic horror. It turns the usual tropes associated with the horror genre on its head to present a drama that delves into what really is fear. It works more as a psychological thriller. 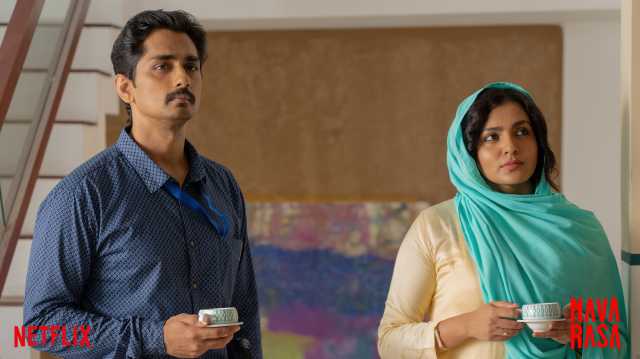 Karthik Subbaraj’s short on peace is about the price one has to pay for giving up a fight. It is set against the backdrop of the civil war between the LTTE, or Liberation Tigers of Tamil Eelam, and the Sri Lankan army. It focuses on a few LTTE troops at an outpost and their encounter with a boy. The idea is praiseworthy, but the message doesn’t get translated effectively enough to make an impact. This film features Bobby Simhaa and Gautham Menon in key roles.

Sarjun’s short on courage is the weakest of the lot. Another story that explores the mindset of a soldier who is handed the responsibility of transporting a wounded Naxalite to hospital. The short asks whether saving a life takes more courage than taking one. But the intention behind the short never comes through convincingly. It has Atharvaa Murali and Kishore playing the central characters.

Bejoy Nambiar’s Edhiri, about compassion, stars Vijay Sethupathi and Revathy. Though the central theme is compassion, the short also touches upon themes like guilt and forgiveness. Can a woman forgive her husband's killer? It’s a slow-burning drama that relies on strong performances from Vijay Sethupathi, who shines yet again with his minimalistic acting, and the veteran Revathy. 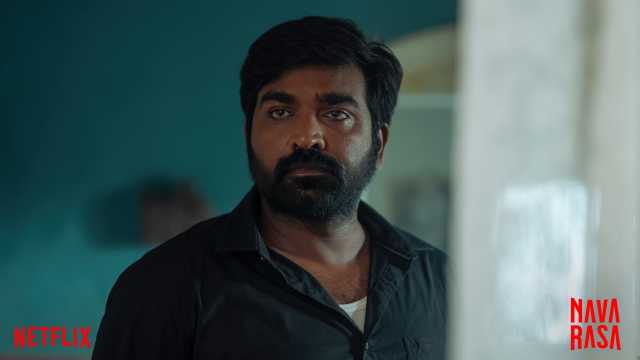 Priyadarshan’s short on the emotion of laughter is a letdown. It features popular comedian Yogi Babu in the lead, but the short is devoid of laugh-out-loud moments. It has an interesting premise but struggles to evoke laughs for the most part.

Navarasa is now available on Netflix.