The film, starring Vidya Balan, was premiered on YouTube as part of the We Are One global film festival.

Directed by Shaan Vyas, Natkhat (2020) had its world premiere online as part of the We Are One global film festival on YouTube. Before the film began, Vyas spoke about its online release in the current circumstances and said he hoped to see audiences back in cinema halls soon.

Sonu is an impressionable seven-year-old who is quite the little firecracker, filled with mischief, strutting around like he is the king of the jungle. He keenly observes the older boys on the playground and aspires to be like them, aping their ways and mannerisms. In his traditional home too, he observes the gender politics at play, where the grandfather and uncle appreciate a show of machismo, which condones violence and aims to show women their place.

When Sonu’s mother (Vidya Balan) observes that the young boy is being influenced by this toxic masculinity, she decides to tell him a bedtime story about cruelty and its consequences on the perpetrators as well as on those around them, hoping that he will grow up to be very different from his father. 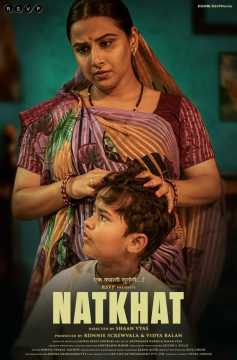 The film deftly captures the ways in which young minds ape what older kids do without understanding what it means, or even the import of their actions. It also makes a strong point about parental and societal responsibility, as the mind of a child is like a sponge, soaking up all that it sees without comprehending it all. The oft-repeated adage “boys will be boys” is voiced by the grandfather, as he almost takes pride in a seven-year-old talking of abducting women!

But most of all, the film is about power. Written jointly by Annukampa Harsh and Vyas, the film captures the ways in which young boys start to become aware of their power over women, physically and with licence granted by a male-dominated society that normalizes violence and the accompanying language that belittles women.

It is also a strong comment on society, religion and even popular entertainment that glorifies violence. The neatly wrapped ending jars against the harsh realism of the rest of the film, but the director makes his point.

The film has been produced by Vidya and Ronnie Screwvala, making this the actress's first foray as a producer. She is the anchor of the film as she tries to mould her child to look at things differently and teach him an alternative world view. But it is Sonu’s wide-eyed innocence and mischief that steals the show as he conveys the conflicting emotions that he feels. It’s quite a revelation that Sonu is played by a girl, Sanika Patel!

The film is part of the MAMI Mumbai Film Festival's selection for the online event and is being shown exclusively on YouTube as part of the We Are One global film festival.

Anvay Shinde’s film without dialogues portrays sexual predators and their hunger for prey....

14 hours ago — Dwijiri B Basumatary

Cinestaan Curates: Happy Birthday Mummyji is about finding some breathing space in a stifling life

The film has been written and directed by Shefali Shah...