Tovino Thomas simmers as a TV reporter obsessed with being on top in this intriguing feature by filmmaker Aashiq Abu.

In this day and age of round-the-clock ‘breaking news’, it’s difficult to get facts right in the race to be the first. News channels report first and rarely ever apologize for any missteps or truths embellished along the way. Aashiq Abu’s Naradan (2022) looks at one reporter’s rise to the top, along with his unyielding belief that he cannot be touched.

Tovino Thomas’s Chandraprakash is a star anchor at News Malayalam, where he is constantly pushed by his editor to stay on top. He and his fellow journalists (all men) gather to blow off steam at a bar after hours. Friendly barbs and banter flow easily, but Chandraprakash is one to hold grudges.

Pradeep John (Sharafudheen) is the opposite of Chandraprakash in many ways; he is principled, honest and works at lower-funded channel Vartha 24X7. But Chandraprakash feels threatened by him and when Pradeep is hired by his editor, his rage and jealousy rises. 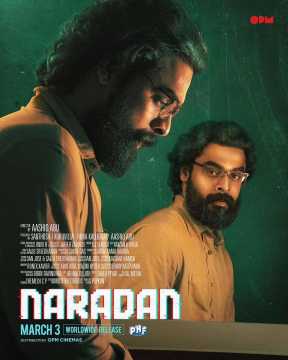 He leaves New Malayalam and is approached by big investors to set up a new channel to back their interests. Chandraprakash agrees and making this channel a top contender amongst others becomes his main motivation in life. His world-view, which is misogynistic and sexist already, turns to getting the story at any cost, he informs his newly formed team.

Soon, the channel Narada is launched, inspired from the storyteller sage Narad Muni, with an explosive sting operation on a minister preying on a young woman for ‘special’ favours. With his new show, Chandraprakash becomes CP, and he is the one creating the stories, not reporting them. As his influence and ratings rise, so does his arrogance, believing he can do no wrong. There arises a game of one-upmanship with his former channel, and his rival Pradeep, and CP does his best to sabotage them.

But an incident with a rapper Mudiyan leaves him smarting, and when the young man is implicated in a questionable drug raid, he gets lawyer Shakira Mohamed (Anna Ben) to fight on his behalf. The young fair-minded lawyer takes on CP like no one has before.

The final 40-odd minutes of Naradan turns into a thrilling court case with actor Indrans presiding as the judge. The film presents a wonderful portrayal where money and influence have no standing over truth and justice. It would be great to see such outcomes in real life as well, but c’est la vie!

Naradan has an intriguing screenplay by Unni R, who highlights the rights of ordinary citizens who are easily maligned in the name of a breaking story. The channels and journalists face no accountability for ruining their reputations. The film also has a more realistic approach of showing a newsroom than the glitzy, well-oiled machines of recent Hindi features.

But the story and screenplay get a bit frantic in places. In the film’s opening minutes, we are thrown a lot of information to digest at once. Once Chandraprakash leaves his job to start Narada, there is a long montage of his transformation (physical and otherwise) from just one of the guys to a slick corporate honcho, vaping away while plotting his next move. He gains motivation from a self-help guru, which also gets bizarre at times. Even his investors become aware of the monster they have created. 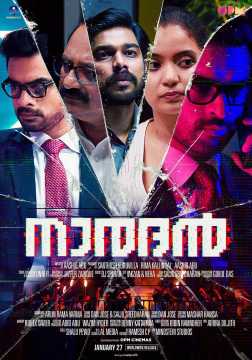 Actor Tovino Thomas embraces all of Chandraprakash’s journey, from ordinary anchor to starmaker. While many laud actor Fahadh Faasil (and rightly so) for his choices, Tovino Thomas, too, has been taking risks in his career, showing what he is capable of.

Last year alone, he acted in the revenge thriller Kala, slow-burn family drama Kaanekkaane, and superhero origin story Minnal Murali. Even as you loathe his on-screen actions, there is something inherently powerful about his performance; he is not afraid to be unlikeable.

Anna Ben, while good, doesn’t have much to do until the film moves to the court. Sharafudheen is impressive as the lone journalist with a spine, while veteran actor Indrans is notable as an objective judge.

Aashiq Abu raises a lot of relevant points about what ails broadcast journalism, not just here, but globally. From filling airtime with needless details to hounding those who come online to speak in panels, there is a lot of toxicity. Merely raising your voice doesn’t make you right, the film intones.

There is much truth as well in the court scenes, with Indrans pointing out the importance of our Constitution above all. While these are all salient points, the execution in the film falters a bit here and there.

But overall, Naradan is an intriguing look at broadcast journalism now and whether ethics and responsibility still matter.

Naradan was released in theatres on 3 March 2022.