Nadi Vahate review: Too boring to make a change

Shwaas filmmaker Sandeep Sawant is back with Nadi Vahate. While Shwaas brought Marathi cinema back on the path of exploring different and serious subjects, his latest project since that heartwarming film just flows without proper direction, often abruptly. The makers probably wanted to leave the film open for audiences to interpret as they would, but, sadly, it only makes them restless.

In line with the subject, we see beautiful shots of a gurgling river that is imperative to the ecosystem of the villages it flows through. River Antee is life-giving to the simple farm and the activities allied to it. Growing turmeric and cucumber and rearing chicken are among the activities that sustain the village. All of these are adequately supported by the quiet Antee.

Knowing how important Antee is to their very existence, it is not alarming that the locals refer to the river in the first person and protagonist Anagha even has conversations with it. Anyone who has ever sat by a stream knows it is alive enough to speak if only you care to listen.

A daypack on her back (the reason for which is not explained), Anagha (Poonam Shetgonkar) swiftly goes through the village helping her mother sell the vegetables they grow on their farm. Sawant takes his own sweet time to establish his characters and the happenings in the village, often in contrast to the peacefully flowing Antee. His shots come and go abruptly, often leaving the viewer a little exhausted trying to make sense of what is happening. Not a single character is explored properly, except that of Antee, about whom we hear endlessly.

A few boys of the village unearth a ploy to sell parts of Antee to build a tourist resort, against the wishes or knowledge of the affected people. The villagers, along with Anagha and her mother, take it upon themselves to explore how they can use the river water for progress, and in keeping with the ecosystem. The tourism resort means jobs, but at what cost?

Sawant hopes to draw the viewer’s attention to the critical issue of land sharks versus locals and also the need for preservation of natural resources. However, in his attempt, he fails to make it fun or even bearable for the audience to feel anything.

The conflict of nature versus progress becomes clearer only towards the end, but it’s too late to save any interest by then. 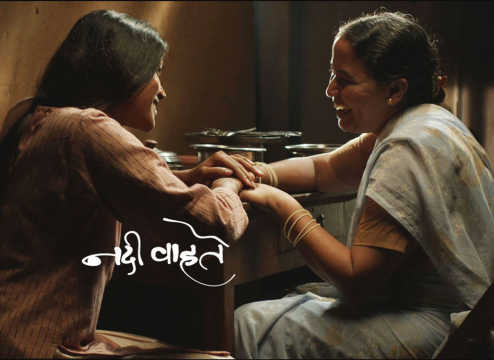 What Sawant does manage beautifully is to direct cinematographer Sanjay Memane to capture the lush carpet of greenery in the Maharashtrian countryside, and highlight the pleasant browns of village life shot in real locations. As a result, what you have is a great-looking film, with matter that often makes you doze, let alone fire you up to feel and act. Another good point would be the bare guitar riffs that run through the film, filling in the awkwardly long silences.

The narrative moves slowly, carrying heavy metaphors of a gushing river. But by the end, you are exhausted trying to understand the point of it all. And, of course, wishing you could take a dip in the Antee and forget it all.