Neither politics nor the depth of human emotions play an important role in the film and the plot doesn't hold any suspense either.

Shagufta Rafique’s Bengali debut Mon Jaane Na has a thoroughly predictable storyline with a lot of regressive concepts and an underlying communal appropriation.

The story is about a rivalry that is sparked by a woman. It reminds you of the archaic idea that seeks to blame women for all the great wars of human epics, be it the Trojan war or the battle of Kurukshetra.

However, readers are requested not to have high expectations of the film as there is no complexity in the plot. Neither politics nor the depth of human emotions play an important role in the film. The director has also designed the plot in a way that it gives away hints to the climax. Hence the audience is left to watch a series of melodramatic sequences.

Watching the film becomes more tiresome because of the sloppy, one-dimensional performances by most of the artistes. Some of the sequences lack logic and the entire film makes you wonder about the director’s intention in telling such a lame story. 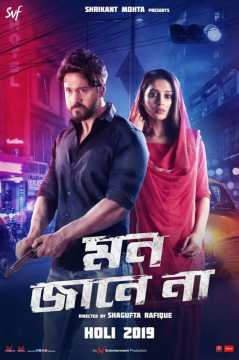 Amir (Yash Dasgupta) works as a hitman under Muradbhai (Shataf Figar), though for all appearances he is a taxi driver. One day he expresses his wish to his partner Irfan to have a companion and soon finds a bride Pari Bano (Mimi Chakraborty).

Both are strangers yet are projected as very comfortable with each other from the beginning of their marital life. However, Amir doesn’t inform Pari about his secret job and tries various tactics to hide the truth from her.

As soon as Murad becomes aware of the wedding, he wishes to have a look at Amir's bride. After Pari is introduced to Murad, the latter informs Amir that the lady is going to be fatal for his job and his life.

A regular hitman, Amir gets terrified after killing a target for the first time after his marriage. Soon, in a turn of events, Pari bumps into him while he is about to shoot a fellow gang member.

Their haven of love turns bitter and Pari, in attempt to escape her husband, lands in bigger trouble that eventually makes Murad’s prophecy come true.

In the first half, there is a dialogue that suggests Pari is a good wife as she listens to whatever Amir says. There are ample examples that talk about coyness being the 'ornament' of a woman. Not to forget that the film begins with a passenger of Amir admitting to murdering his wife while slut-shaming her.

Nowhere do we see that Murad has fallen in love with Pari, or that he passionately desires her, yet he, a cold-blooded criminal, does not hesitate to betray his most trusted gunman and ruin Pari’s life for no other reason except to make his own prophecy come true.

In various sequences of murder, there is always a police van following Murad's vehicle. If that implies that the police are in his pocket, then later when police officer Pramod Ray (Shankar Chakraborty) investigates the crimes, no confrontation takes place between the police and Murad.

There is no relief in the tragic drama. Some sequences are melodramatic while others are insipid. All the relationships seem to have been corrupted. If the director wished to portray the story of a strong love that remains intact despite long separation and despite everything the lovers have faced, the rush of events on screen takes away from the intensity that is required to establish the essence of that love.

The biggest drawback of the film is Yash Dasgupta’s consistently singular expression in every kind of emotional sequence. Whether he is love, in grief or on the verge of taking revenge, his expression doesn’t change. His lack of flexibility as an actor takes away the impact the film could have had.

On the other hand, Mimi Chakraborty appears to be too charged up. She is bubbly and happy-go-lucky in the first half, but in the second she just repeats her eccentric expressions as a drug addict.

Shataf Figar puts up a larger-than-life act but without much modulation. Only Shankar Chakraborty’s performance as the police officer stands out as natural.

There is hardly a frame in the film that stays with you except the one in which Amir and Pari are seen romancing against the backdrop of Howrah bridge. Tanmoy Chatterjee has done a decent job of curating the set for the song 'Keno Je Toke' sung by Raj Barman.

Dabbu and Lincoln’s background score is quite repetitive and merely adds to the melodrama quotient of the film.

The film might have made sense if there was a message on drug addiction or even a realistic depiction of the problem. But here, even the world of criminals lacks authenticity and the film turns out to be a regressive show because of the way it portrays the female protagonist, who doesn’t have any agency other than to submit to all the more powerful forces in her life.