While deliberately trying glorify Mitin as a ‘female’ detective, director Arindam Sil has rather undermined the potential of her character.

Arindam Sil’s Mitin Mashi (2019) is an average attempt of a cinematic adaptation of Suchitra Bhattacharya’s detective Prangya Paramita aka Mitin Mashi. The film deliberately attempts to glorify the concept of a female detective rather than focusing on a complex dramatic crime plot.

From the trailer, it is evident that the film revolves around a child's abduction from the affluent family of Rustom Jariwala, played by Vinay Pathak. A fine actor like Vinay Pathak could have had a better debut in Bengali cinema, as his character in the film is quite one-dimensional and some of his sequences are not directed sensibly.

Generally, in a detective film, almost all the characters carry certain suspicious attributes. In Mitin Mashi, the characters are rather one-dimensional and they hardly add to the complexity of the plot.

Rustom Jariwala, cautious of his reputation and his child’s safety, prefers to engage Prangya Paramita aka Mitin (Koel Mullick) to track the kidnappers rather than the police. As Mitin delves into the case, she gradually realises the abduction is the plan of an insider, who is aware of Jariwala family’s personal information.

The crime itself is rather simplified and carries certain usual motifs. Mitin is first asked to leave the case by the family members and she also gets threatened. However, like any other detective, she completely ignores the threats and continues with her job. With extraordinary and unconvincing physical abilities, she also manages to fight off goons alone. 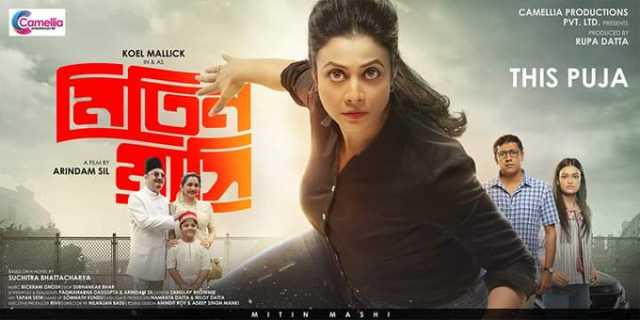 For a detective, it is not important to have the attributes of a macho hero. Though it is definitely better for the women to have the physical training and strength to be able to fight off the evils in any situation, Sil could have made Mitin mashi much more intellectually fascinating. Apart from being calm, sensible and having the ability to take the right decisions at the right time, Mitin hardly possesses the charm to pull in the audience.

The pace of the film drops in the moments when Mitin ponders the case alone. These moments do not really push the audience towards anticipation, but are deliberately kept to reflect her inner turmoil as a woman without children, who feels deeply for the missing child. Additionally, the two semi-classical songs by Ustad Rashid Khan and Madhubanti Bagchi, are rather unnecessary for a detective story.

While investigating for the crime, Mitin comes across a classmate of the kidnapped kid, who possesses an uncanny memory. It is hard to fathom a young child minutely remembering the colours of the attires of a stranger and the numbers of a car, without being asked to remember them. The climax, as well as the revelation of the crime, will not hit the audience hard for its simplistic format.

One of the biggest drawbacks of the film is the performances. While Koel Mallick has put up a natural act as a resolved and balanced woman, and Vinay Pathak has delivered his best within limitations, it is hard to put up with June Mallya’s screaming overacting and the actress who portrays Ritwika is almost expressionless. Subhrajit Dutta justifies his role as a supportive husband and Riya Banik’s act as Mitin’s assistant is quite immature.

Cinematographer Subhankar Bhar and editor Sanglap Bhowmick have done the best jobs in keeping the film visually appealing at least. Bickram Ghosh’s background score has nothing new to offer. However, the songs rendered by Khan and Bagchi are rather soulful compositions.

Mitin Mashi is not worth the anticipation of a full-fledged detective film. While deliberately trying glorify Mitin as a ‘female’ detective, Sil has rather undermined the potential of her character. Mitin Mashi can hardly inspire the female audience, apart from motivating them for getting physically trained.