It’s an ordeal to sit through the film, which makes a mockery of the process of setting up a business.

Keerthy Suresh’s Miss India, directed by Narendra Nath, on paper promises a lively story of women's empowerment but in reality, it is an uninspiring and extremely boring tale of a woman with big dreams and who, expectedly, goes on to prove her naysayers wrong.

Despite the film's intent, the screenplay doesn’t translate to an engaging viewing experience. In fact, it is a downright ordeal to sit through Miss India, which makes a mockery of the process of setting up a business.

Keerthy plays a character called Manasa Samyuktha and she aspires to build a business empire by opening a chain of chai stores under the brand name Miss India in the US where coffee houses rule the roost. As an eight-year-old, she is asked to have a goal in life because it’s more important than good grades, so she grows up with the dream of making it big in the world of business. Despite coming from a middle-class family, our "struggler" lands up in San Francisco thanks to her elder brother. After completing her MBA, Manasa tells her family she wants to get into business but she is met with stiff opposition. She eventually leaves home and strikes it out on her own. 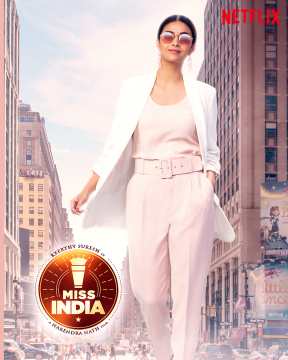 There’s so much Miss India gets wrong in its writing that it leaves one scratching their head. For instance, there’s a scene where Manasa, an MBA graduate from an international university, sets up a chai truck without a licence in the United States. When she’s pulled up by the authorities, she tries to convince them she right by saying that she’s just selling tea. This silly scene is unfortunately one of many gems that are scattered throughout the film. Also, the film incredibly tries to make us believe that Indian chai is a completely alien concept to Americans in the 21st century.

The film is also plagued by silly characters. Quite early on in the film, we are told Manasa’s father (played by Naresh) is suffering from Alzheimer’s. It’s disappointing that the director and his writer decided to make light of the medical condition by playing it up for laughs. Jagapathi Babu, who hasn’t changed his look in years, plays a sexist businessman who runs a successful coffee business and doesn't gives two hoots when Manasa approaches him to fund her business. All the foreign characters are plain stupid and hardly convincing.

Keerthy shocks us by picking yet another project that does absolutely no justice to her potential and undermines the recognition she has earned nationwide for her performance in the Savitri biopic, Mahanati (2018). But despite her prodigious talent, Keerthy couldn't do much to prevent Miss India from being a snoozefest.

With its simplistic yet spellbinding storytelling, the film is populated by memorable and lifelike...

Expiry Date review: Intriguing thriller keeps you on the edge of your seat

Barring his accent, Tony Luke delivers a solid performance in this 10-episode series about jealousy,...

Hindered by a distinct lack of thrills, the film is a colossal mess with its terrible writing and...