Written and directed by Rajendra Talak, the bilingual film’s characters hardly convince the viewer about the purpose of this film.

Two characters who have met accidentally on a scenic beach in Goa start talking about how the other’s presence has caused trouble in their current life. Artiste Vikram (Sainkeet Kamat) and graphic designer Priya (Pallavi Subhash) have an unusual first and second meeting outside a stately yellow-white bungalow called Miranda House. Their acquaintance ends up in Vikram’s hotel room as each finds “something fishy” in the other’s conduct.

Over drinks, Vikram reveals that one Samar Bandodkar is after paintings made by his late artiste father who committed suicide. Priya reveals how Samar had wronged her mother years ago when she was pregnant with Priya and refused to marry her. Are they revealing the full facts to each other? Or are these just lies? Also, why are two strangers revealing their deep, dark secrets?

Director Rajendra Talak’s treatment of this thriller is different, refreshing even, if one can say so. Resul Pookutty and Amrit Pritam Dutta’s lilting sound design is soothing and, frankly, quite misplaced in this film. But it is also the reason for elevating the film and its effect. The soft instrumentals effectively establish the characters, settings and semblance of a story. But it’s not enough.

Miranda House suffers from problems of pace, among other things. Talak’s experimentation to slow down proceedings does not work, as the viewer gets an awful lot of time to fill in the gaping holes and guess the climax. It is also disheartening to see Konkani theatre stalwarts Prince Jacob and John D'Silva wasted in bit roles that add little or no value to the story.

Sainkeet Kamat is assured in his act and delivers confidently, but Pallavi Subhash comes across as undercooked, mainly on account of the lack of meat in her character. 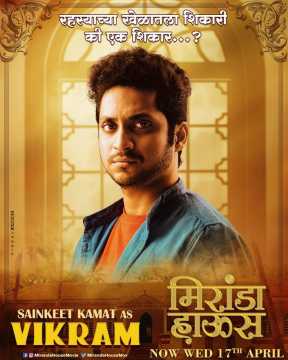 The characters smugly declare that "Sagla nazrecha khel asto [everything is a game of perception]", but can hardly convince the viewer about the purpose of this film. It comes across like a self-indulgent project and even at approximately an hour and a half, Miranda House seems way more stretched for a feature. A steady pace and short film treatment and format might have been more suited to the concept.

The only saving grace, apart from the score, is Suraj Kurade’s camerawork. Interesting top angles and camera movements add to the intrigue, and depth to certain happenings. Vardhan Dhamodkar’s editing is non-intrusive, making the flow smooth. However, the technical finesse can’t always cover up for a story as shallow as the seashore.

Miranda House is a bilingual film simultaneously shot on location in Marathi and Konkani. With the limited publicity and close-to-nought buzz in Maharashtra, the film seems to have fallen off the radar just as quickly as it arrived in theatres. This house is not worth a stay even if you are a fan of the sunny state.

Director Pratap Phad has managed to present a conventional story in a refreshing manner....

It is somewhat disappointing that filmmaker Sanjay Jadhav chose to not fully flesh out the themes...