Despite the plain treatment and some flaws, Laxman Utekar's film is propped up by the endearing performances by its leads.

Motherhood is a complicated matter. From personal experience, mothers can love you as much as they hate you. And with good reason.

In Mimi, filmmaker Laxman Utekar goes into the process of a woman's transformation into the figurative mother. In attempting to do so, the film ocassionally sacrifices depth of story and characters for the message. Yet, in the end, it remains an entertaining drama, propped up mainly by two very good performers in Pankaj Tripathi and Kriti Sanon.

The story begins with John and Summer (Aidan Whytock and Evelyn Edwards), an American couple traversing India to find the perfect surrogate mother. Spurred by the idea, their sly driver Bhanu (Tripathi) shows them to Mimi (Sanon), an aspiring actress in a small town.

Mimi is drawn in by the lure of the money which could help fuel her 'Bollywood' dreams. But motherhood and surrogacy are no bed of roses. When things go wrong, Bhanu, Mimi and the others are caught in the trap of their own well-laid plans. 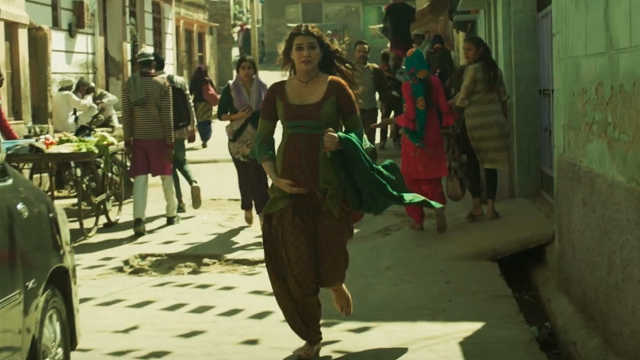 The story goes high on melodrama to emphasize its message of motherhood's sacrifice, struggles and importance. Utekar does not mince words to drive home his message. In the process, he does sacrifice some of the nuance that was needed to handle a sensitive subject like surrogacy, its complexities, legal loopholes and injustice, et al.

Then again, this is not the film for those matters. Mimi is more about Utekar's idea of motherhood and why it is above everything else. An example is the idea of Mimi sacrificing her dreams immediately after the birth of the surrogate child. A bit unbelievable but not completely unreal in India.

These shortcomings of the plot are covered up by a talented cast of artistes. Sanon runs through a gamut of emotions but is at her best as the funny, meteoric Mimi. Brash, ambitious, happy-go-lucky, the actress sets the tempo in the early moments of the film.

But try as she might, she cannot overshadow the effervescent Pankaj Tripathi. Simple, calm, blending into the role with ease, the actor is indeed a consummate performer. Increasingly ,it is difficult to differentiate him from the characters he plays. He can steal a scene with a line or even a nod of his head.

Sai Tamhankar adds a different layer to the story. Her Shama is the sober, mature friend who brings composure to the screen. She shares a similar presence as the two other major performers, Manoj Pahwa and Supriya Pathak. Sadly, the story does not offer any of them scope to be more than the emotional supports that they are.

Utekar's film has its flaws. Mimi's folks accepting the child after its birth, Bhanu continuing a friendship beyond the event, down to the resolution of the conflict, all feel like letdowns. Another aspect conveniently forgotten is the struggle of the couple trying to get the surrogacy completed. Their emotional investments remain mostly unexplored. There is also some sacrifice of realism to ensure the melodrama in the story. Yet, with performances that are on point, the film ends up being an entertainer.

Mimi is not real, hard-hitting, or a film about social awareness. It is entertaining, funny at heart, melodramatic with a slice-of-life story. Utekar's Hindi sophomore film manages to play well within the boundaries of the mainstream with a very un-mainstream subject. That, in the end, is a plus.

Mimi is now available on Netflix and Jio Cinema.

Correction, 29 July 2021: The reviewer had described Mimi as director Laxman Utekar's Hindi debut film. It's actually his second film in the language. His first Hindi film was Luka Chuppi (2019).