Vivek Soni's film tells a story of romance in arranged marriages but is exposed by the weak treatment and a narrative that fades away in the second half.

The tale of the original Meenakshi Sundareshwar was, perhaps, far more dramatic than the one Vivek Soni's film conveys. It is not without charm, a large part of it lying with Sanya Malhotra's vibrant Meenakshi. Yet the film fades away as it progresses deeper into the relationship, dragging its way out to a simple fix, quite like Sundareshwar manages.

The film begins with a charming mix-up of identities between two families looking for prospective spouses for their offspring. Sundareshwar (Abhimanyu Dassani) is the youngest in a sheltered family ruled by a strong patriarch. With ambitions to grow as a programmer, his decision to walk away from the family business of saris has already earned him a rebuke. Meenakshi is a contrast with her vibrant personality, worship of Rajinikanth, and the courage to take anything on the chin.

Like all miracles, the mix-up results in chemistry and love. Except, this love is restricted within the boundaries of a conservative family in an arranged marriage. When Sundareshwar finds his first opportunity in a software company (where else but in Bangalore?), the volatility of a long-distance relationship is thrown in. Et voilà! Disappointments, regrets and distance follow. 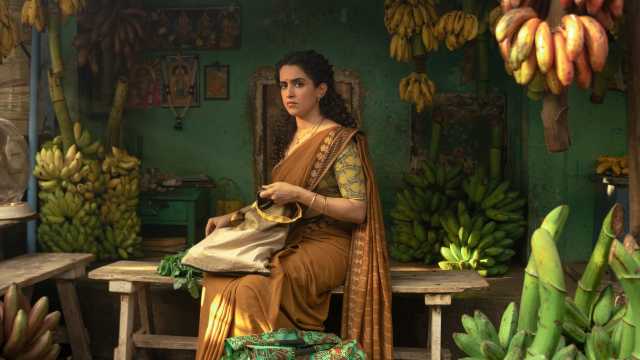 Soni's film is cute to begin with. The quickness of the romance takes you by surprise and is engaging. Sanya Malhotra is quite good as Meenakshi despite the flawed Tamil (a problem with everyone in the film) but is let down by the lack of development of her character in the script.

There is a decent enough supporting cast that stands in mainly as fillers to create problems or situations for the story. Abhimanyu Dassani is sincere but too insipid to inspire interest through the actions of his character. The actor feels miscast at times though he is more comfortable in the urban scenarios of a corporate life in Bangalore.

The big flaw lies, perhaps, in the story (Aarsh Vora, Vivek Soni) which aspires to capture the freshness of a romance set in the South but does not get the details right. To have the 'Venkateshwara Suprabhatam' used as an aarti is one problem. Pronouncing Madurai as 'Madu-raai' or using 'dosai' rather than 'dhosai' throw you off.

These might be forgivable details, but they reveal that the makers sought to portray a proper Tamil family without bothering to go into the details. In an increasingly cosmopolitan industry, it would have been easier to find traditional Tamil speakers or, at least, research better to add to the authenticity of the tale. These little details often enhance the narrative.

Another key issue with the plot is that it demands too much of Meenakshi. A girl who grows up unbridled, supported, educated suddenly has to give in to Sundareshwar's dreams and ambitions. That it does not change even after she drops in on him partying is playing to the same old trope of the dutiful wife and 'bahu' (daughter-in-law) rather than applying the idea in more progressive fashion. There may have been a progressive thought behind it, but it does not come across well.

Meenakshi's friendships become suspicious, her habits are looked down upon. It is the woman who has to do the most to stay invested in the relationship while the man gets away with doing the minimum. She makes friends with his sister and sister-in-law, tries to mingle with the family. We never see him even think twice before moving to Bangalore immediately after marriage.

If the emotional drama that followed were impressive, it would have papered over this flaw. Sadly, it is not. The climax, when it arrives, feels like a compromise to settle the issue. Unwittingly, the film reveals the fatal flaw in arranged marriages.

The production, as expected from Dharmatic, is top notch. Justin Prabhakaran's music and background score and Debojeet Ray's frames are wonderful and make the scenes enjoyable. Yet, these are minor reprieves from a stereotypical story that lacks depth and careful thought in its construction.

Meenakshi Sundareshwar was premiered on Netflix on 5 November.