Mardaani 2 review: Rani Mukerji takes on a new psychopath in this riveting sequel

The actress leads the charge in a new city, against a more deranged antagonist, in the Gopi Puthran film.

Actress Rani Mukerji returns as Shivani Shivaji Roy from Mardaani (2014) for this new thriller which takes her character to Kota, Rajasthan, from Mumbai, Maharashtra. Shivani’s husband Vikram (Jisshu Sengupta) and her niece Meera (Avneet Kaur) have only brief appearances as they remain in Mumbai.

Roy is now superintendent of police in Kota and goes up against a new young antagonist, Sunny (Vishal Jethwa), in the sequel written and directed by Gopi Puthran.

Though young, Sunny is ruthless and calculating. He manipulates his way into the lives of his victims, playing on their weaknesses. Mardaani 2 opens with Sunny stalking a young woman, Latika, and then brutally raping and murdering her.

The case comes under Shivani's purview and she takes the lead to uncover the accused. From the beginning, she understands that the man is a chameleon and has disguised himself in public. When she calls him out on national television, he takes it personally and begins a campaign to take her down.

Sunny infiltrates Shivani's surroundings to know more about the case and eliminate any leads that go back to him. But as he smugly grows more satisfied with his own cleverness, he underestimates whom he is up against.

Shivani is a more than a capable opponent for the brash but clever killer as she employs psychological techniques and her own instincts to weed him out. Puthran, who wrote the script of the 2014 original, takes over the directorial reins from Pradeep Sarkar for the sequel. 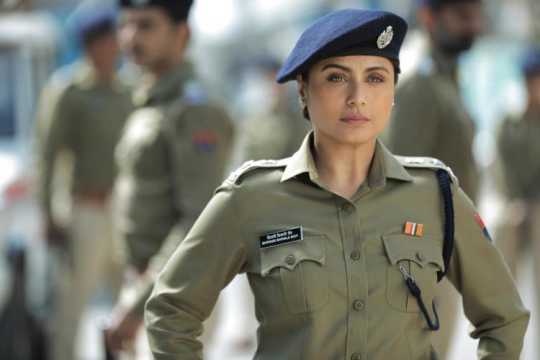 The writer-director builds on the world created in the first film and creates a credible environment for Shivani to reside in. As a woman in power, she has to battle not only her superiors and those who work under her, but also take on society which questions her every move as the rape case makes national headlines.

But the movie expends way too much effort on Sunny who, despite his youth, is painted as a criminal mastermind who is always a step ahead of the police, until the gripping finale. Sunny changes disguises several times to evade capture and seems to almost get away with it all.

Jethwa, in his first film, immerses himself in the meaty part of a misogynistic psychopath. The young actor is known for his roles on television shows Bharat Ka Veer Putra: Maharana Pratap and Chakradhari Ajay Krishna.

The character is also saddled with the unsettling habit of speaking directly to the audience, rather conversationally, which is dropped by the second half. That is likely because a ticking clock (Shivani has two days to solve the case) replaces the annoying characteristic.

Mukerji is capable as ever as Shivani, but like the heroes of some other Hindi action films, she also makes some bad choices, like heading into dangerous situations without backup. Her Shivani may be no shrinking violet, but she is no superhero either.

As a thriller, Mardaani 2 is riveting. Both Shivani and Sunny engage in a cat-and-mouse chase as they try to outwit each other. There are genuine moments where your stomach might be in knots trying to guess what gruesome fate awaits certain characters.

Watching the finale play out becomes a bit troubling. The film shares several depressing statistics about women and their safety and representation in India. But in the light of recent events, the meting out of public violence and the gradual glorification of violence on the big screen is alarming.