Directed by Arindam Sil, the non-linear film with an evocative cinematic composition is anchored by a powerful performance by Gargee Roy Chowdhury in the title role.

Arindam Sil’s film Mahananda (2022) is inspired by the life and works of multiple award-winning author and activist Mahasweta Devi, who fought relentlessly for the rights of tribal and marginalized people.

It is evident when watching Mahananda that a lot of research has gone into the making of this film, which progresses in a non-linear fashion and focuses primarily on how Mahasweta Devi never deviated from fighting for her philosophy and ideals with an uncompromising attitude.

In the film, Gargee Roy Chowdhury plays the fictionalized version of Mahasweta Devi, author Mahananda Bhattacharya, who is married to Bidhan Bhattacharya (Debshankar Haldar), inspired from Bijon Bhattacharya, one of the founding members of the Indian People's Theatre Association (IPTA).

Mahananda, the film, begins with a riveting sequence of tribal freedom fighter Birsa Munda being tortured by the police inside a dark prison while calling upon his followers to resist British rule. It sets the tone for Mahananda’s journey, in the course of which the writer repeatedly went to people living close to nature to learn about the struggle and art of survival when society denies them access to resources.

Birsa Munda and, later, young leftist workers being hounded and silenced in jail before the Left Front formed the government in West Bengal find their voice in the writings of Mahananda, who is guided by her prolific husband at the start of her career. She realizes that more than the history written from the perspective of the powerful, it is the folk songs and traditions of people that contain a humanist retelling of events.

Years later, when Mahananda has abandoned her family to lead her life among the Adivasi people, a young PhD aspirant Mahaal (Ishaa Saha) is advised by her boyfriend Bihaan (Arna Mukhopadhyay), a leftist party worker, to make the author the subject of her research. When she reaches out for a meeting, the aged Mahananda initially taunts Mahaal for her lack of connection with the stark reality of the indigenous peoples, but then she gladly invites her to explore her lifestyle through the life of the Munda and Shobor people, as she makes it clear that without detailed knowledge of their lives, Mahaal will not be able to do worthwhile research on her works either.

Mahananda and Mahaal’s intimate conversations reveal a lot about how the tribal people, initially declared barbaric by the British rulers, have been exploited for years. As Mahananda, affectionately called Maa by the tribal villagers, reveals how her marriage fell apart owing to ideological differences, Mahaal, too, begins to sense Bihaan’s political agenda, which basically serves capitalist interests in the garb of communist ideology. 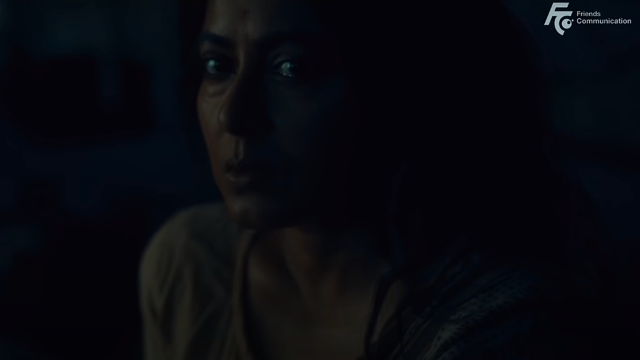 The parallel narratives here explore how women from all social and economic strata are targeted for flexing power. Eventually, the rape and murder of a tribal woman by party goons employed for land acquisition opens Mahaal’s eyes and she joins Mahananda in her movement to protect the tribal people and their lands.

Through dialogues and visuals of tribal uprisings, the film analyses the trajectory of a political history in which the idea of independence doesn’t have much significance for the tribal people. The subtly lit frames, dominated by earthy colours, sometimes turn into dreamy sequences depicting moments of major transition in Mahananda’s life.

While the visual composition takes a theatrical tone at times, the moments of arguments and resistance are restrained, and magnify the dignity of Mahananda’s ideological strength.

Gargee Roy Chowdhury delivers a gripping performance while imbibing the transitions in Mahananda’s character. As an aged, and experienced, lady, Mahananda is fearless, straightforward and has an ability to see through the layers, and that’s why she discards Bihaan from the very beginning of her association with Mahaal. Roy Chowdhury masters a body language which carries the signs of ageing but discards all the tenderness in mannerisms and way of speaking.and stays true to her fighting spirit.

With a grounded performance, it is clear that Ishaa Saha is growing as an artiste. Debshankar Haldar is a natural, while Arna Mukhopadhyay does justice to his character of an opportunistic hypocrite and chauvinistic political party worker.

Ayan Sil’s camera makes best use of the low light and creates evocative frames throughout the film while refraining from lending an urban perspective to the narrative. It cannot have been easy for editor Sanglap Bhowmick to capture so many important elements from the epic length of contributions of Mahasweta Devi and weave them together in a compact film, but he has done a commendable job.

While Bickram Ghosh's musical score often overwhelms films, the use of flutes and sombre tunes, along with folk songs by Dipanita Acharya and Rabindra sangeet by Sahana Bajpaie, add depth to Mahananda.

The over-the-top performances of some minor characters sometimes hurt the film's subtle tone. A few sequences from Mahananda’s early life could also have been discarded. Arindam Sil also makes his political affiliation quite clear with the unapologetic use of colours associated with different parties. However, his commendable attempt at recreating Mahasweta Devi's life also tells the viewer why it is important to carry forward her legacy, especially at a time when the interests of minority groups are deliberately targeted and their voices silenced.

Mahananda was released in theatres across West Bengal on 8 April.