Karthik Subbaraj weaves an interesting relationship drama with the father-son duo that takes two well-known Gandhian ideals – non-violence and Prohibition – to spin an interesting story around faith and freedom.

Karthik Subbaraj has always been an exciting filmmaker among the new crop of directors redefining Tamil cinema. With mostly novel attempts to his credit, including the heavily panned Jagame Thandhiram (2021) starring Dhanush; Karthik has emerged as one of those filmmakers whose work you want to follow closely.

With Mahaan, which features father-son duo Vikram and Dhruv Vikram together on the screen for the first time, Karthik weaves an interesting relationship drama that takes two popular Gandhian ideals — non-violence and Prohibition — to spin an interesting story around faith and freedom.

Mahaan is centred on a character named Gandhi (Vikram), who is born in a Tamil family that idolizes the Mahatma and his way of life. Gandhi’s grandfather and father played their parts in the country's independence movement and are staunch believers in the Gandhian ideology.

Gandhi is raised strictly in the Gandhian way, which eventually takes away his freedom to live life the way he wants to. Cut to 30 years later, on his 40thbirthday, Gandhi, a teacher now, decides to spend the day doing everything he had always wanted to do when his wife and son are away on a trip to Tirupati. He meets a former student, Rocky, who now owns a chain of bars with his father.

Rocky decides to celebrate Gandhi’s 40th birthday in a big way and gets him drunk. All hell breaks loose when Gandhi goes home the next day and his wife decides to leave him. Gandhi goes back to join Rocky and his father Sathyavan (Bobby Simhaa) in their liquor business and soon becomes the most successful liquor baron.

Twenty years later, when Gandhi crosses paths with his son Dadabhai Naoroji aka Dada, the drama that ensues forms the crux of the story. 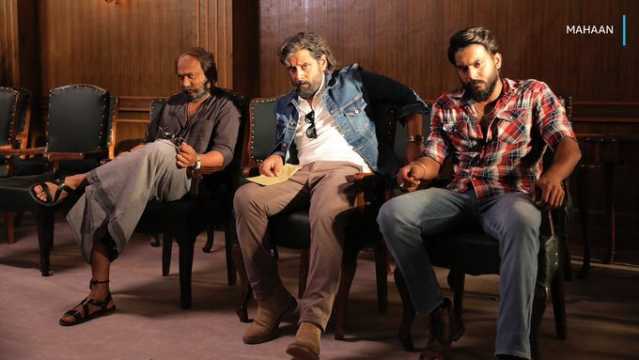 Mahaan raises an important question about taking someone’s ideology and imposing it upon others and expecting them to embrace it wholeheartedly. Vikram’s character is the perfect example of that kind of person who has been forced to live a certain way because of an ideology that was imposed upon him by his father. That same ideology turns him into an extremist.

There is a beautiful dialogue towards the end of the movie which talks about how blind faith in an ideology can turn one into an extremist. Karthik takes this idea, about faith fuelling extremism, and pits a father and son in a battle for revenge which makes Mahaan a terrific relationship drama.

Mahaan extracts an uninhibited performance from Vikram, who is refreshing in a character that spans over five decades. This is a mature performance, and he embraces the character’s flaws and vulnerability convincingly. Dhruv looks more comfortable in his second outing as an actor. After making a strong impact in his debut film, a remake of Arjun Reddy; he delivers a slightly exaggerated performance which suits the character. Bobby Simhaa gets a meaty part and though you find him in almost every Karthik Subbaraj film, he manages to spring a surprise each time.

Mahaan feels long drawn but it is held together by the interesting relationship drama featuring Vikram and his son Dhruv.