Made In Bangladesh review: Stunning performances but the content fails to address the focal issue

The film gets into a problematic position as the story ends up focusing on the journey of an individual, shifting from the focal point of the subject, the labour class.

Rubaiyat Hossain’s Made in Bangladesh has some stunning performances in an authentic setting. The film also beautifully brings out the power hierarchy that works against the best interest of the labour class of the society, incorporating the layer of gender politics.

The film is visually gripping with technical finesse that retains the raw essence of the content in every frame. However, the entire strong package fails to generate a long-lasting impact, and in the end, it turns out be the victory story of the leading woman.

The narrative opens scopes for layered narratives with many complexities and introducing characters with potentials; however, it ends in a simplistic note and many of their journeys end without a proper closure. As a consequence, Made In Bangladesh, gets into a problematic position as the story ends up focusing on the journey of an individual, shifting from the focal point of the subject, the labour class.

Shimu (Rikita Nandini Shimu) is a rebellious worker in a sewing factory, along with many other ladies from her neighbourhood. The workers are continuously exploited in the factory, as they do not receive adequate payment for their overtime schedule.

Shimu comes across Nasima (Shahana Goswami), a gender activist, who first introduces her to the idea of a labour union. Fearless Shimu, not scared of taking a risk, senses that she can bring justice to the unfortunate death of her fellow worker and also, make the other employees aware of the rights of the labourers.

The rest of the film narrates her journey of eventually seeking her rights for forming a labour union, rather than focusing on a collective journey against the incessant exploitation of the employers, who don’t even shy away from lying to foreign investors when they make demands for cheap labour. 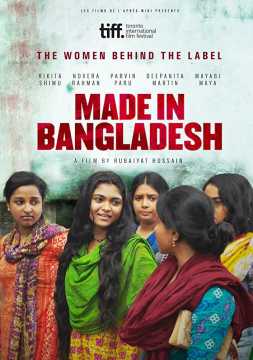 The narrative could have explored the layers of gender politics more with the character of Dalia (Novera Rahman), to show that when the victim is a woman, the exploitation does not solely remain limited within the professional arena, rather it gets layered.

The equation between Shimu and Sohail is rather realistic and convincing. On the one hand, Sohail shares the household responsibilities with Shimu and doesn’t stand in her way to achieve her goal, but when his ego is hurt and people fills his heart with suspicion regarding his wife, he exhibits the typical patriarchal traits by exercising his power on her.

There was also a suggestion to the dirty politics that plays within the sector that apparently tends to empower women, but eventually exhibits autocratic attitude when it comes to sticking to their ideals. However, that section is not explored as well.

Rikita Nandini Shimu is brilliant as the protagonist, with her fiery performance. She transforms into an ideal character, who is ready to put her security at stake. But unfortunately, her fellow employees have to bear the consequences of her daring steps. However, she is aware of fellow employees’ sacrifices and makes sure to stand up for them at any cost.

Mostafa Monwar and Novera Rahman’s acts also get etched in your mind. All most all the characters have their individual narratives and the realistic performances make them stand out.

Sabine Lancelin’s cinematography and the production design of the interiors of the ladies’ residential colony provides a visual trip that is eye-opening and raw. The way Lancelin’s camera captures the female employees, secretly consulting in the dark corners of the street, or presents a gripping visual of a scuffle between Shimu and Sohail that is intimate and carries proof of insecurity in an apparently stable marital relationship,, is truly treat to the eyes.

Tin Soheili’s background score allows the audience to have a soothing journey into the alleys of an underprivileged world that has been ravaged with exploitation. It lends prelude to the rising rebellion under the cover.

Made In Bangladesh is worth the watch for the performances, but the ending of the film disappoints as it doesn’t fulfil so many hopes as it promises. The audience can only derive inspiration from Shimu’s character but for the sake of the film, she gets to lead a glorious path towards her goal without much hindrance that continuously challenges the other supporting characters. Whether Shimu eventually achieves in giving back them their rights remains unaddressed.

Made In Bangladesh was screened at the Arthouse Asia Film Festival, Kolkata, on 7 January 2020.

Our Grandparents Home review:  Rising above the bitter past to pave way for a brighter future