Laxman Utekar's film builds on an inventive plot, but suffers from its weak screenplay.

Kartik Aaryan's first foray outside the Punchnama world is a passable take on the changing concept of marriage across India. Without his standard monologue, or the emphatic punchline, Aaryan and Kriti Sanon bring some life into Laxman Utekar's Luka Chuppi. But it's not enough.

Guddu Shukla (Aaryan) is the star reporter of Mathura. When a controversy over actor Nazim Khan's statements about live-in relationships blows up, Guddu is tasked with covering the 'sanskriti' protection agenda of politician Vishnu Trivedi (Vinay Pathak) in Mathura. To his luck, Trivedi's daughter, Rashmi (Sanon) joins his team and they fall for each other, and try the dreaded live-in experiment.

The comedy is built around the premise of a live-in relationship being an experiment to prove compatibility. While it is not feasible to expect reality in a comedy, it would have been funny to see the couple struggle to pay bills, help each other through sickness, fight over cleaning up and arguing.

Rohan Shankar's story puts the live-in relationship as the metaphor for a new generation's search for freedom and love. While politics continues on the same old story of culture and tradition. 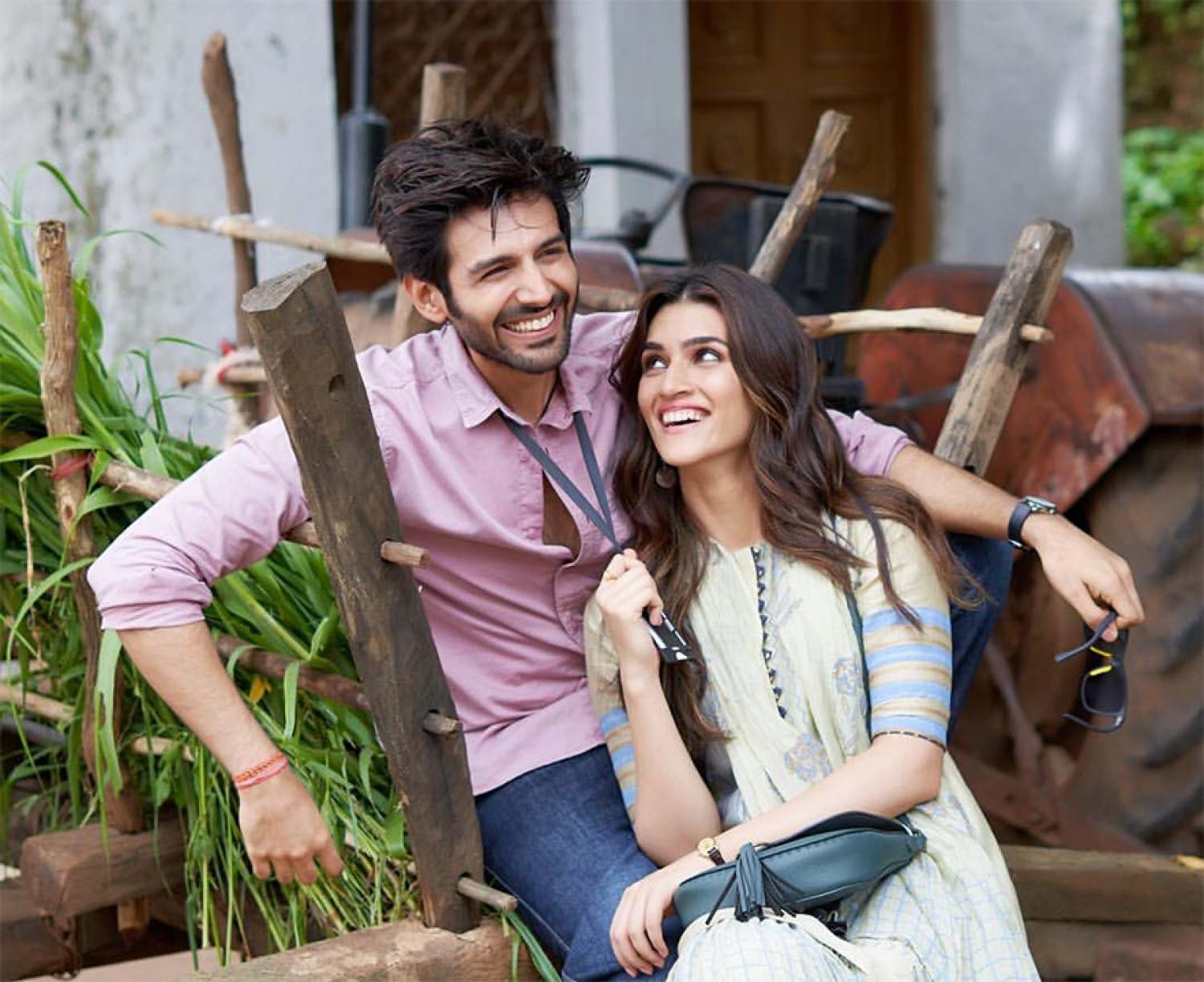 The screenplay is the weak point in the film. The comedy is more situational than dialogue-based, yet there are moments that are worth the ticket.

While the first half has its moments, it plods through the process of establishing its characters. The second half proves the true winner where the couple's struggle to really get married results in some hilarious misunderstandings entering the story.

Aaryan carries the film playing the decent guy caught in a situation beyond his ken. For once, he is portrayed as a character accused of being a lech, crook, for simply being a guy who wants to get married without attracting the ire of his parents.

Kriti Sanon is a misfit as a small-town girl, but the actress delivers with some real moments of hilarity.

The comedy is brought along by Pankaj Tripathi, who plays an over-the-top lech and gossip monger trying to find the secret between the 'married couple'. The actor is hilarious in his physical comedy and inimitable dialogue delivery.

Avinash Kohli and Aparshakti Khurana also bring their deceptive natural appearance to add to the humour. Kohli plays Guddu's elder brother struggling to find a bride. He is hilarious in the moments of helpless envy at his brother's antics.

Khurana delivers as the token Muslim friend tasked with keeping the secret. His character also gets to play the moral high ground against discrimination.

Utekar's film is funny and passable in its narrative, but not throughout. The film sags in portions where the comedy sometimes gets repetitive, and the drama does not come through.

The special moments are the use of old songs as the cue to scenes in the film. The inclusion of 'Ek Chatur Naar' and 'Main To Chhod Chali Babul Ka Des' are examples.

Luka Chuppi, though, remains a mildly entertaining and an effective comedy that might prove Kartik Aaryan has more to offer than just monologues.

The Hardik Gajjar-directed film is a one-time watch that unfortunately never realizes its potential...