Ludo review: Multiple storylines converge but do not connect organically

The Anurag Basu film has its fair share of flair and imagination but isn’t quite able to bring it all together in a cohesive manner.

Like the board game of Ludo and its four squares, the film Ludo (2020), written and directed by Anurag Basu, features four stories which end up criss-crossing and overlapping each other. On the outskirts of a city, Ludo opens with Yamraj (played by Basu himself) and Chitragupta (Rahul Bagga) indulging in a game of Ludo whilst observing the mere mortals below.

Local flashy don Sattu Bhaiya (Pankaj Tripathi) kicks off the chain of events by murdering a builder, grabbing along witness Rahul (Rohit Saraf) for safekeeping. Bittu (Abhishek Bachchan), Sattu Bhaiya’s former right-hand man, has been released from jail but has retired from a life from crime, despite the don’s best efforts to lure him back.

Meanwhile, ventriloquist and dubbing artiste Akash (Aditya Roy Kapur) is tracking down his ex Shruti (Sanya Malhotra) days before her wedding as an old sex tape (recorded without their knowledge) emerges at a most inopportune time. Finally, Pinky (Fatima Sana Shaikh) has no one to turn to when her husband is arrested for murder except her old pal, Alok aka Aalu (Rajkummar Rao) who has never quite gotten over her. 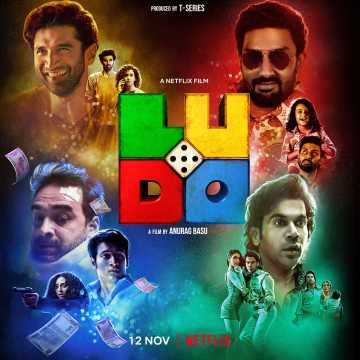 While Sattu Bhaiya is the common denominator for them all, more players join the game of life, from nurses Sheeja (Pearle Maaney) and Latha Kutty (Shalini Vatsa) to Bittu’s ex-wife Asha (Asha Negi) and her new husband Bhanu (Bhanu).

Each of the core characters has a dilemma to solve. Aalu, who can’t say no to Pinky, wants to be her saviour even though it means reuniting her with her worthless husband (Paritosh Tripathi). Shruti and Akash, with the help of the police, are trying to figure out which hotel illegally recorded their rendezvous, while Bittu, estranged from Asha, just wants a glimpse of his daughter Ruhi but settles for helping out little Mini (Inayat Verma) seeking some attention from her parents.

Poor Rahul and Sheeja get trapped with the unscrupulous Sattu Bhaiya in an ambulance, along with two bags filled with money. Later in hospital, Tripathi’s don sets his goons on their trail. Eventually, things come to a head at the aptly named Hotel Paradise where the fates of several characters are decided.

Doing justice to the arcs of all the characters may not be entirely possible in a feature that runs for two and a half hours, and some storylines feel rushed. Due to the language barrier between the two, Rahul and Sheeja’s communication is mostly wordless, and the artistes playing them get lost in the overall madness.

Similarly, the storyline dealing with Akash and Shruti suffers and they get further entangled in the adventures of Sattu Bhaiya, his goons hunting down Rahul and Sheeja with the money. The other two storylines feel more prominent. 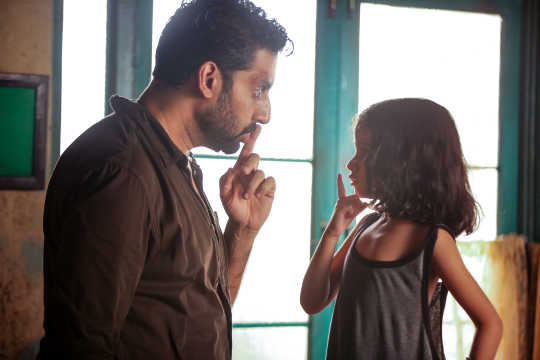 The relationship between Bittu and Mini has its tender moments and Bachchan adds the emotional heft to his longing to reconnect with his own young daughter, who doesn’t even know he is her father.

Rajkummar Rao brings a real sweetness to his role as Aalu, the reluctant Mithun Chakraborty fan, who dances when he is both happy and sad. Tripathi is a hoot as the rascal Sattu Bhaiya, while Maaney and Vatsa make an impact. The impish Verma steals the film with her innocence.

While there is much to admire in Basu’s Ludo, the story tends to get a bit overcrowded after a while. The police are largely inept here and Yamraj and Chitragupta make frequent appearances discussing heady issues like sin and virtue, leading us to ponder the fates of those on screen. “Life is like a game of Ludo,” Basu’s Yamraj intones and some characters manage to escape mishap after mishap, gaining an extra turn at life, it seems. 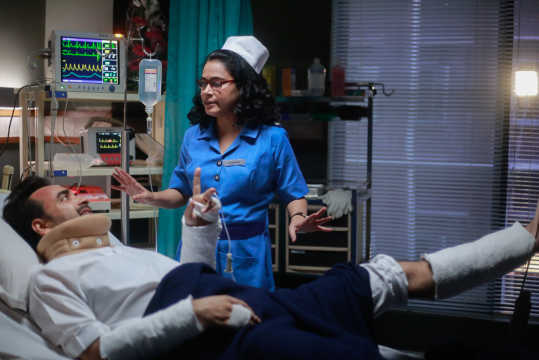 The feature is dotted with the dominant colours of the game, with red, yellow, green and blue accented in different ways — through lighting, costume, props, colour grading, even visual effects. Ludo has Anurag Basu’s stamp all over it. Besides acting, writing and direction, the tireless filmmaker has also shot parts of the film and done the production design.

While certain scenes are poignant and have that special Anurag Basu touch, especially in the use of the catchy song from Albela (1951) in the narrative, others seem have to have been dialled up for comedy.

However, unlike previous Anurag Basu films, the lovely songs by Pritam seem have to shifted to the background, with so much action occurring on screen. The plot grows outlandish and fantastical as it progresses, and becomes too much to bear.

Ludo is a brave attempt to weave in multiple storylines that are all connected in some way, but it just becomes exhausting keeping track of each. Basu was able to do this more effectively in Life In A... Metro (2007). Here the concept overpowers substance.