Lootcase review: Humorous caper that needed to be tighter in its storytelling

The Rajesh Krishnan film, starring Kunal Kemmu as a common man who discovers a bagful of money, is filled with high jinks and silliness, but needed to be a lot more punchier.

An ordinary man Nandan Kumar (Kunal Kemmu) stumbles upon a red suitcase packed with Rs10 crore outside a public urinal one night.

The 'moneybag' in question is actually the property of a shady MLA named Patil (Gajraj Rao). When Patil entrusts the suitcase to gangster Omar (Sumit Nijhawan), he gets caught in a beef between the gang and a rival gang led by Bala Rathore (Vijay Raaz) after the accidental killing of Jameelbhai.

As the two gangs face off in a shootout just before an important political transaction for Patil, the cops swoop in. Balabhai's men hide the bag, and Nandan is the lucky fnder later that night.

But once he gets his hands on the money, Nandan's life is fraught with tension — how to hide the money from his wife Lata (Rasika Dugal), his neighbours, his co-workers at Saavdhaan Times, and basically stay under the radar despite the fact that he is now a crorepati.

Kemmu tackles Nandan's middle-class woes head on. Living in a chawl, the printing press employee has few little options how to spend the black money, and he is blissfully unaware of the search undertaken by Omar, Bala and inspector Kolte (Ranvir Shorey), the encounter cop hired by Patil to hunt down the bag.

While they launch their own investigations, Nandan struggles to keep his life as normal as before while showering his wife and son Aayush (Aryan Prajapati) with gifts. 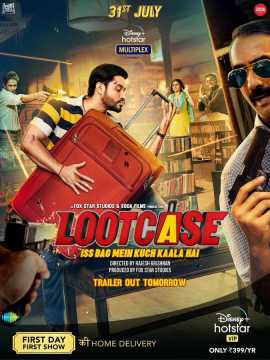 Writer-director Rajesh Krishnan and co-writer Kapil Sawant have created a colourful cast of characters. There's Patil, the passive aggressive politician who throws threats across with sweetness, and the suit-clad Balabhai who insists that his henchmen subscribe to National Geographic channel and use nature's metaphors in life. It's a jungle out there, Raaz intones.

Nandan's neighbours add flavour to the typical Mumbai life in a chawl. But unlike the real Mumbai, this cinematic representation is less chaotic. Production designer Rateesh UK captures the cozy one-bedroom life of a middle-class couple.

Both Kemmu and Dugal are sweet as the simple Nandan and Lata. Kemmu's Nandan is good at wriggling out of difficult situations, thanks to his innocence, and Dugal nails the middle-class ethics of her Lata, who eventually grows suspicious of her husband's largesse.

Gajraj Rao, Vijay Raaz and Ranvir Shorey are excellent as usual and are perfectly cast. The rest of the ensemble cast, from Omar's brother Abdul to the rickshaw driver who takes Nandan home, are also given proper comedic moments.

The screenplay has several doses of humour, like the gangster who stops to count to 10 in a shootout, or the real-estate representive who mistakes Bhandup West for Budapest. And naming the red suitcase Anand Petekar was a nice touch.

But the screenplay also takes its sweet time getting to the eventual resolution of the looted money. For all its urgency, the gangsters and Patil seem to let several weeks pass by in their search for the prize catch. The film meanders a lot into Nandan's daily life, neglecting the rest of the characters, who are a hoot. The song 'Pavitra Party' also seemed unnecessary to the overall narrative and runtime.

The clever film needed to be a lot tighter and a bit punchier as well. The promise shown in the trailer last year is not fully translated here. But despite the leisurely, indulgent pace by Rajesh Krishnan in his first film, Lootcase is enjoyable and you will find yourself laughing out loud more than once.