Directed by Sachin Pathak, the impressively scripted web-series pulls out a rabbit from its hat.

Crime dramas often focus on the crime, the criminal and the process of capturing them. In the first season of SonyLIV's Kathmandu Connection, this formula is tweaked with impressive results. Gripping, well-written and excellently performed, the web-series delivers the goods.

The story opens on DCP Samarth Kaushik (Amit Sial) of the Delhi police. Like a hardboiled noir detective, he is well into his forties, divorced, struggling with alcoholism and a rising star in the ranks. The only problem is his attitude towards authority.

When a seemingly coincidental connection between a murder, the abduction of a businessman, and the stalking of a journalist emerges, Kaushik goes beyond the line of duty, with his instincts taking him to Kathmandu, the capital of Nepal. This ties the cop to an ambitious journalist (Aksha Pardasany) and a quietly rising underworld boss, Sunny (Anshumaan Pushkar). 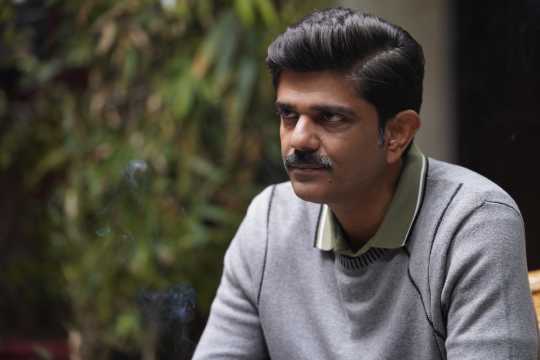 The story's central focal point may be Sial's rough-around-the-edges policeman, but the lens shifts smoothly and effectively. Sachin Pathak's storytelling is slick and to the point. There are no unnecessary flourishes that hyperventilate over events or key moments. This makes the drama all the more effective. The writing by Siddharth Mishra does not reveal any key plot points ahead of time.

While the series starts off a little slow, it gradually gets its hooks into you. The narrative moves deftly into the key conflict and builds up from there. One could complain that the story feels a little too simple in the end, but it retains the element of surprise.

While six episodes are too short to focus on the complex relationships and psychological motivations, Mishra and Pathak do a good job of building a logical narrative. There are no departures from character development. Pardasany's Shivani emerges as a truly complex woman full of ambition and vengeance. Sial delivers as a cop who cannot think beyond the conclusion of his case.

Pushkar struggles with emotional lines. His character's obsession and confession of love seem too sentimental and clichéd, but these elements can be forgiven due to their necessity to the plot. Gopal Datt is another actor who feels a bit underused as the geeky CBI officer who holds the strings.

The key to any series is good writing and Mishra delivers in this department. The story is set in the 1990s, with a key part of it taking place a decade earlier. Although it is reminiscent of the war between the Mumbai underworld factions that shifted overseas, the narrative is primarily centred on three individuals.

With its final flourish, the series keeps you on tenterhooks. The simple production values, snazzy editing and beautiful music (kudos to Sneha Khanwalkar) add to the entire experience. Kathmandu Connection is definitely worth a watch.

Kathmandu Connection is being streamed on SonyLIV from 23 April.

Ayananka Bose's cinematography is the only saving grace of this insipid Prabhu Deva film....

Anshuman Jha and Zareen Khan do a decent job portraying queer individuals looking for love and but a...

Suvinder Vicky is quietly effective as a lonely truck driver dealing with several crises at once in...